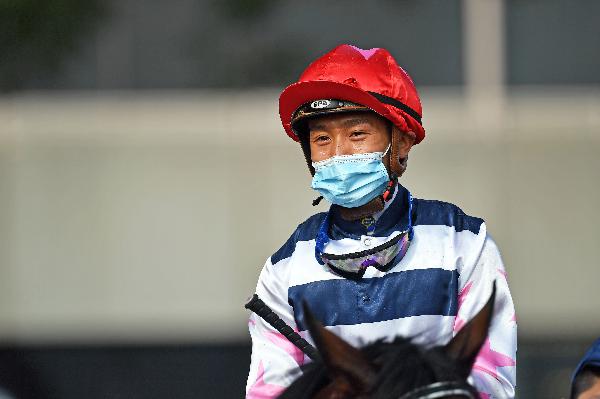 With three places still to be assigned in the star-studded 12-rider roster for the 7 December LONGINES IJC — including one for Hong Kong’s leading home-grown jockey — Ho (18 wins) holds a commanding six-win lead over his closest fellow Hong Kong rider Matthew Chadwick (12) with only two meetings left before the final selection is made.

Ho, winner of three Tony Cruz Awards as Hong Kong’s top home-grown jockey, is excited at the prospect of joining the IJC series.

“I’m happy to have the chance to be involved,” Ho said. “It’s a privilege to ride against all the top jockeys in the world and I’m excited to have a chance to be in it.”

Chadwick, who also had a double with Excellent Peers and Gold Marquis, is well placed to join his compatriot in the series after moving into fourth place in the Hong Kong championship with 12 wins as Tony Cruz, Frankie Lor and Caspar Fownes shared Happy Valley training honours with doubles.

Peter Ho combined with Matthew Poon to clinch the Class 2 Tokyo Handicap (1650m) with Packing Award, who posted his sixth victory in 14 starts with a head margin over Mr Ascendency. Savaquin was a neck away in third.

“My main target is the January Cup. He’s a very honest horse and it’s very hard to find a horse like this. He’s more relaxed now and always tries his best,” Ho said.

Cruz and Luke Ferraris closed the meeting in style with the triumph of Winning Dragon, a dual G1 winner in Chile, in the Class 3 Hanshin Handicap (1650m). Runner-up Pegasus General was also a G1 victor in his native Brazil.

Vincent Ho started the meeting in a blaze with a race-to-race double, initially delivering Happily Friends (133lb), a Hong Kong International Sale graduate, with perfect timing to snare the first section of the Class 5 Fukushima Handicap (1200m) for Chris So.

Angus Chung posted his first Happy Valley winner when the 10-pound claiming apprentice piloted Circuit Elite to an all-the-way success in the Class 4 Chukyo Handicap (1800m) for Cruz. Chung, 26, has ridden eight winners at Sha Tin this season since returning from his stint in Australia.

Reigning Hong Kong Champion Trainer Lor extended his excellent start to the season when Savvy Chic swept to victory in the second section of the Class 4 Nakayama Handicap (1200m) for Silvestre de Sousa. Lor has 17 wins for the campaign so far.

“I told the jockey to follow other horses if he needed to, but this horse (Savvy Chic) has a lot of speed and he was able to lead,” Lor said. “His next start will depend on how many he points he gets in the handicap. If he stays in Class 4, I will look for another 1200m race at Happy Valley.”