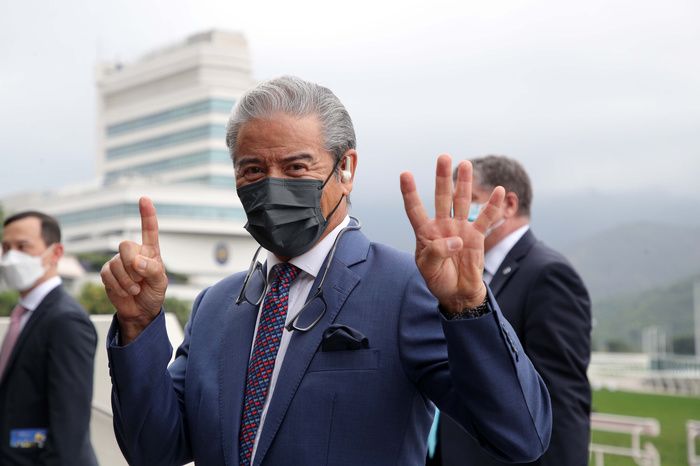 Now the most successful trainer in the Lion Rock Trophy’s seven-year history, having won it previously with The Golden Age (2018) and Ka Ying Star (2020), Cruz believes Beauty Joy is capable of ascending even higher through the grades after notching his fourth win of the season.

“Good horses can relax and they can change gears and they can quicken. He's the type of horse who can do that. He won a Group 3 race today and I think he can be a Group 2 horse,” Cruz said.

“It (the race) started fast and then they started to pull it up on the turn and Beauty Joy started to throw his head up because they slowed it down. But Zac has got good hands, so he could still relax the horse and he could still finish strong. I was very happy with the ride and all credit to the jockey.”

Posting his first win in the Lion Rock Trophy, four-time champion jockey Purton registered his first treble since 1 May. Since then, the Australian has battled fitness issues to slot only three winners from the ensuing seven meetings — until Sunday’s bounty.

“His performance was good, he’s obviously a talented horse. His overall record (four wins from eight starts) in Hong Kong is very good and he’s still got a little bit left there. He’s a handy horse,” Purton said, while also addressing the horse’s racing manners.

“It’s come out of nowhere, he was a really nice horse to ride and then he wanted to start playing up in the gates a little bit and he begun a bit ordinary a couple of times and then he had a bit of time off, he came back and now he’s doing this stuff.

“He’s obviously a little bit tricky, he just doesn’t like it when they back the pace off at the moment. He’s done this three times in a row now, so we’ve got to correct and as he’s getting up in the ratings, it will get tougher.”

“When I got this ride, I was very happy because he’s a good horse — he almost always wins — so I was very thankful to Mr Size to give me this support. We had a good race, perfect midfield cover, and then he gave me the dash to finish,” the Frenchman said.

“I just did the ride — the horse is in very good form.”

“He just lost all of his form and his desire, so he had us a bit baffled,” Hall said. “He had the blinkers on before and it didn’t have much effect on him so when he became as frustrating as he has been, I decided to try the visor on him in a trial and it was the first time he’d shown a bit of positivity.

“I was hoping he was going to carry that form forward to the races and thankfully it worked.”

Benno Yung believes Handsome Twelve, emphatic winner of the Class 4 Tate’s Cairn Handicap (1650m, dirt), has the scope for plenty of improvement after posting his first win in Hong Kong at his eighth attempt.

Vincent Ho narrowly denied Purton in the following event when he coaxed Ricky Yiu’s Robot Warrior to victory in the Class 4 To Fung Shan Handicap (2000m).

“He's a typical stayer and this is his best season so far. He's fully mature now, he really knows what he's doing now and he's in good health,” Yiu said before Purton completed a double aboard Dennis Yip’s Phoenix Light in the Class 4 Sha Tin Heights Handicap (1200m).

Yiu returned to the winners’ enclosure when Shining Gem shouldered 133lb under Derek Leung to snare the Class 3 Kau To Shan Handicap (1400m).

“He’s a nice horse,” Yiu said. “To carry a big weight and win like that was very good.”

“Today, the horses were good and in the last race Winning Dreamer drew barrier 12 and I had the confidence that he would still perform really well and luckily the race panned out really good,” Ho said.