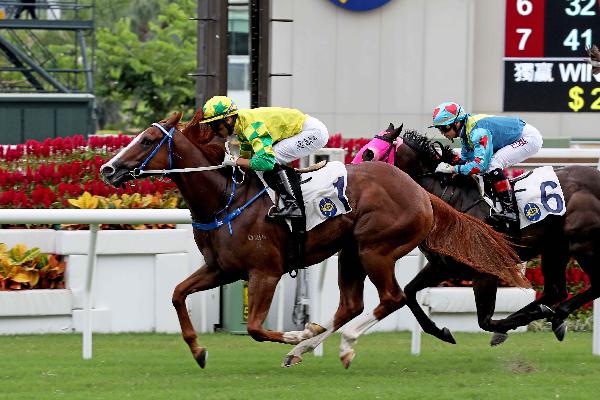 By Leo Schlink
Yet to reach and fulfil his true potential and pitted against the explosively-gifted Wellington, Sky Field will be given the opportunity to build both experience and profile when contesting the G2 Sprint Cup (1200m) at Sha Tin on Monday (5 April).

Trainer Caspar Fownes firmly believes the sparingly-raced son of Deep Field has the capacity to ascend to Group 1 company by the end of 2021, but realises the gelding needs more experience.

“He’s going good, I’m confident he’s going to make it into a top horse at the right time, at this stage with another six months under his belt, we’ll probably see the best of him,” Fownes said of the chestnut.

“He’s getting there - he ran well the other day (when third behind Wellington at Sha Tin in mid-March), I feel the rating of the race on Monday is against him this time but he’s slowly creeping into that area where he’s starting to make his presence felt in bigger races.

“I think he needs a bit more experience at the top end, but he can certainly reel off a very, very quick last quarter which makes him a chance to win a big race in Hong Kong.

“I think he get well into triple figures by the end of the year, like around 115-plus. If he can do that, then he’s there really but he’s still learning his trade.”

Fownes will experiment with a gear change he hopes will ultimately prove crucial.

“He’s had quite a few runs but in saying that I’m trying a Norton bit on him in a trackwork gallop and if that works, he’ll take that to the races and that might just be the making of him,” the dual BMW Hong Kong Derby-winning trainer said.

“If he respects the bit, that could be the making of the horse.”

Fownes will saddle Southern Legend in the G2 Chairman’s Trophy (1600m), where he will clash with Waikuku and Ka Ying Star among others.

“Southern Legend is fine, he’s got a small field and I’m sure he’ll run his race,” Fownes said, indicating the G1 FWD Champions Mile on 25 April at Sha Tin as the gelding’s premier objective.

“He’s been prepared for the big one at the end of the month, so whatever he does on Monday, he’ll improve on. He’s had a nice preparation in Conghua and he looks good, he had a nice trial the other day and he’s in a good place.

“He’ll run well and be very competitive but he’ll be at his best on the 25th of April.”