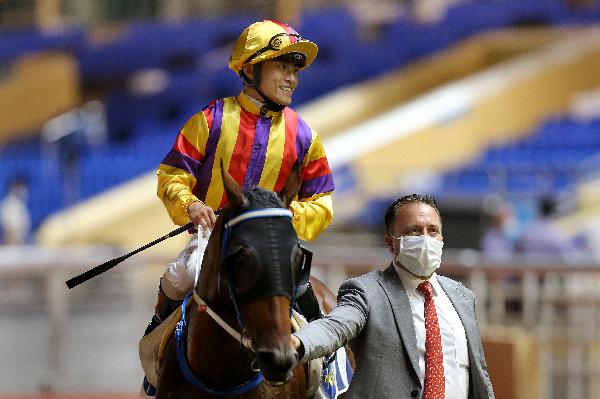 With six wins at the city circuit from three meetings, Fownes is living up to his nickname as the “King of the Valley” and he kicked off his evening’s tally when Jazz Steed and Chad Schofield dead-heated with the Francis Lui-trained Shining On and Vincent Ho in the Class 4 Repulse Bay Handicap (1200m).

“I thought Francis (Lui) had got me right on the line, so I’m very happy with that result,” Fownes said. “Last season we had a similar race that I thought I’d won but lost, this time we dead-heated – no complaints.”

Jazz Steed, a Hong Kong International Sale graduate, took his record to two wins from 10 starts with that win, and, with a current rating of 54, he is just six points shy of a Class 3 berth.

“We’ll see how he is, he’ll probably only get four points because it was a close finish and a dead-heat, so we’ll try to find another race for him in a few weeks,” Fownes said.

After a disappointing 11th first-up, the Exceed And Excel gelding reversed his form tonight with a win, the first of a double too for Schofield who praised Fownes for the galloper’s turnaround in form.

“I think the tongue-tie changed him, he’s a horse who has ability and last start was too bad to be true; well done to Caspar (Fownes) for rectifying the problem, he deserved a win and it was good to see him bounce back from his defeat,” Schofield said.

While an added piece of gear was the key to Jazz Steed, Shining On benefited from a short stint away from Sha Tin.

“Conghua has made him more relaxed, most of my horses based there have become more relaxed,” Lui said of the co-winner.

Schofield went on to secure his double in the following race, the Class 4 Middle Bay Handicap (1000m), aboard the Manfred Man-trained Farm Bumper.

“He was quite impressive today - I know him quite well from last season and he was always close in Class 4 but today he won with a bit of purpose,” Schofield said.

“It was a good win and Manfred (Man) had him nice and fresh coming into today and I think being fresh over 1000 metres is his go.”

Keith Yeung came to the fore with a double on Wednesday night at Happy Valley to take his tally for the term to three wins, five shy of his last season’s total, with 82 race meetings to go.

“Last season was a bad season and if I was strangled by it I’d be too depressed and wouldn’t feel like I want to do anything,” Yeung said.

The 32-year-old kicked off the new term with victory at the season-opening fixture and tonight’s brace started with Royal Racer in the Class 4 Shek O Handicap (1650m), to seal the Fownes double.

Yeung closed his account with a win for trainer Douglas Whyte aboard Amazing Kiwi in the Class 3 Chung Hom Kok Handicap (1200m).

“Douglas (Whyte) told me before the race that he thinks the horse works better than he races because he was a little disappointed as he knows he has ability,” Yeung said.

The Helmet gelding surprised at 36/1, having finished eighth first-up for the season seven days ago over the course and distance.

“He never quite lived up to that first run,” Whyte said, referencing a Hong Kong debut second back in December of last year. “He’s a morning glory, his work at home is exceptional and the other day he had a nice run and he pulled up well after last week’s run and I thought you’re going to run again next week.

“I’m just glad for Keith because he’s been a fond friend of mine for a long time and I’m glad that he is riding with such purpose at the moment.”

Yeung’s double takes his career-total to 258 Hong Kong wins but he is not raising expectations, nor setting goals for the new season.

“If you give yourself too much expectation then you’re going to end up with lots of disappointment when it doesn’t happen and it can break you,” Yeung said.

“Just stay level and keep yourself happy – happiness is the source of everything and if you’re not happy you’re not going to do well at anything.”

“He’s a lovely horse, it’s surprised me that he’s taken this long to win a race, he came over in good health,” Whyte said. “He’s a lovely individual to work with and I think the freshen up was the biggest key to him as well as the step back in distance first-up, that was probably the winning move.”

“He’s a very nice horse, I thought this time he could sit behind and catch the other horses, I think he’s improved,” Ting said. “I thought his rating was a bit high for him so I booked Jerry with his ten-pound claim.”

Amazing Star shot from a Class 4 rating of 58 last season to a career-high mark of 100, but with options running out at the city circuit, Ting will have to look to the big track with his stable standout.

“There are no more races for him at Happy Valley, so we have to go to Sha Tin,” Ting said. “The outside draw is no worry to this horse because he’s fast enough, but this time, this race was too fast so he needed to sit a little bit, but now we know that he can take a sit, there’s no need to go in front.”

Jazz Steed wasn’t the only Hong Kong International Sale graduate to win on the card, the Tony Cruz-trained Beauty Angel outstayed his rivals in the Class 4 South Bay Handicap (1800m) under a driving Joao Moreira.

“He had a good split and a beautiful run through in traffic and he was very strong to the line - I’m very pleased to ride another winner for Tony Cruz who has shown me great support and it seems like there is more to come from this guy - he was just too good today,” Moreira said.

Ho left the track with a double, having taken the opener, the Class 5 Stanley Handicap (1800m) aboard the Me Tsui-trained Strapping Bauhinia. The low-rated gelding set a new class record time of 1m 48.69s.

Hong Kong racing continues on Sunday (27 September) at Sha Tin with a competitive card that features the G3 Celebration Cup Handicap (1400m), in which Beauty Generation and Golden Sixty are set to face each other.