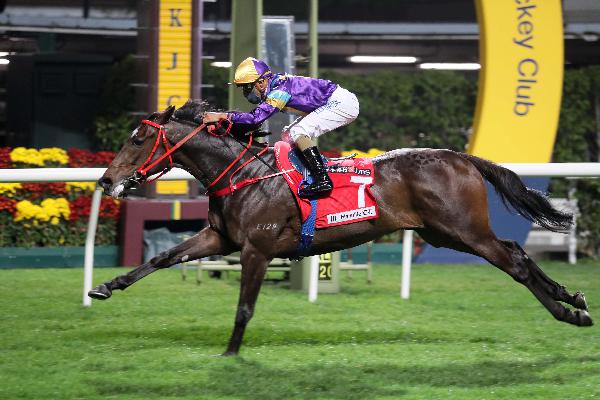 A devastating last-start winner over 2200m at Happy Valley on 17 February for Danny Shum, Charity Fun drops back to 1800m but, such was the convincing nature of his most recent performance, Teetan oozes confidence over Sunday’s outing.

“Last time, the only instruction from the owner (Charity Racing Syndicate) was that ‘You have to win by as much as you can’ and as I turned the corner and looked at the big screen, I saw I was four lengths in front and I thought ‘Well, you can’t win by more than that’,” the Mauritian laughed.

“Of course, they are trying to get his rating up to go to the Derby and I think if he does get the rating, I think he deserves his chance. I think he will be very competitive - his first run was impressive.

“He’s a lovely horse – he had the race run to suit but everything went well.

“He won pretty easy and he looks like he’s got a bright future.”

Having stamped staying credentials with a surging finale at the city circuit, the War Command gelding reverts to a shorter assignment but on the roomier Sha Tin expanses.

“Should be no problem. The Sha Tin track should suit him even better because it’s a bigger track where he can be more comfortable,” Teetan said.

“It’s going to be different because both his runs have been at Happy Valley and he’s got an awkward draw to deal with, but I think he’s good enough for the race.”

Successful over 1400m at Sha Tin on 31 January aboard Tony Millard’s charge, Teetan is confident there are more wins in store for the Power gelding.

“That last bit impressed me because not many horses would do that after being held up and still get away,” Teetan said of Ultra Express’ win.

“I knew he had a turn of foot - he’s a lovely horse, to be honest, and he’s improved a lot – his last win impressed me.

“He’s only getting better now.”

Moreira will bid to edge closer to another century of Hong Kong wins when he partners Fantastic Way in the Class 3 Pat Sin Leng Handicap (1200m).

An impressive debut winner over 1200m on debut in Class 4 at Sha Tin on 31 January, the Swiss Ace gelding will attempt to continue an upward trend for John Size and Moreira.

“It was such an eye-catching win, wasn’t it? He won with authority,” Moreira said.

“He won with plenty left in the tank and, going up in class, he’ll need to produce the same form but once again he’ll very hard to beat.

“Physically and mentally, he’s a very straight-forward horse. He’s calm in the gates and he has a great reaction. He’s always going to jump and put himself straight on the speed.

“But I don’t think he’s a horse who will have any problem finding cover and then finding the line behind a hot pace because he’s got ability.”