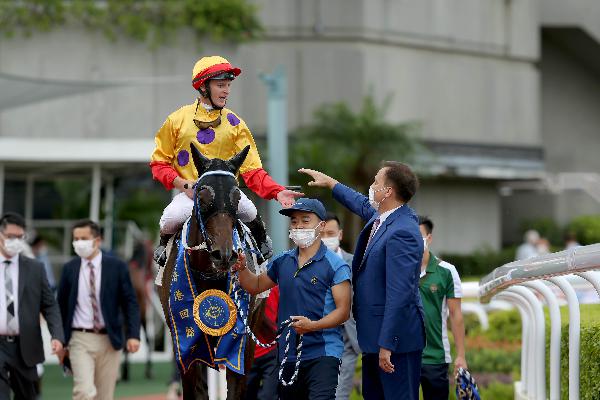 Zac Purton was on the mark for Caspar Fownes aboard Columbus County.
Hong Kong Jockey Club

By David Morgan
Columbus County struck a blow for Zac Purton and this year’s BMW Hong Kong Derby crop with a victory full of promise in the Class 2 Hong Kong Reunification Cup Handicap (1800m) at Sha Tin on Wednesday, 1 July.

Purton saw title rival Joao Moreira bag a brace that ate into his championship lead in the first half of the card, but hit back in the feature to hold an end-of-day advantage of 138 wins to the Brazilian’s 133.

Columbus County belatedly broke his Hong Kong maiden at the seventh attempt, having performed a shade disappointingly when ninth to Golden Sixty in the BMW Hong Kong Derby back in March. Fownes’ four-year-old is only the second horse out of the blue riband to have won a race subsequently, but both handler and rider hold positive expectations for the future.

Fownes echoed the three-time champion jockey’s assessment of the New Zealand import, who ran third in the G2 Waikato Guineas (2000m) when known as Sword In Stone.

Moreira needed a big day and he struck early aboard the David Hall-trained Red Brick Fighter, the 5.2 market leader, in the Class 5 World-Class Leadership Handicap (1400m).

He made that two wins aboard Beauty Angel in the Class 4 Serving The Community Handicap (1800m), but with just four of the remaining five race meetings open to him, the difficulty of the task at hand has barely been eased.

Beauty Angel aided Tony Cruz’s cause as he maintained tabs on the top two in the trainers’ premiership, and also led home a timely one-two-three-four of Hong Kong International Sale graduates, with the July auction set for Friday (3 July) night.

The winner cost HK$2.7 million out of the 2019 July Sale; runner-up Circuit Number One, a half-brother to Derby winner Wings Of Eagles, was an HK$11 million purchase out of the March 2018 sale; third-placed Speed Force cost HK$1.1 million from the 2019 July sale; and the fourth home, Eptiwins, was a HK$7.2 million March 2018 auction purchase.

The Frankie Lor-trained Deep Field gelding was more than a cut above his 13 rivals and drew a length and a quarter clear under Vincent Ho in a time of 55.64s.

Ricky Yiu and Francis Lui exchanged the lead in the trainers’ premiership but it was the former who still held sway when racing ended.

Lui nosed past his opponent when the ever-game Thou Shall Sing took race six, but the reticent handler wasn’t singing and that proved wise.

Ho drove Thou Shall Sing (130lb) to a neck success in the Class 4 Riding High Together Handicap (1200m), ahead of the Jack Wong-ridden Star Superior (117lb).

Neil Callan has never been synonymous with the John Size stable but the Irishman pegged a rare victory for the champion trainer – his second all told – in the Class 4 Uncompromising Integrity Handicap (1400m).

Leading Fortune rallied for Callan’s determined urging to edge out the Purton-ridden Triple Triple by a bobbing short-head. His only previous success for the yard, from 45 rides, came aboard Enreaching in February 2017, but 13 of those opportunities have come this year alone.

Callan has had two mounts on Leading Fortune with this win following a close second on the four-year-old a couple of weeks ago.

The French-bred Siyouni gelding took his tally to two wins from 10 starts and Callan believes there is more up-side.

&nbsp;“It’s been a fantastic day but I had horses with chances again, and of course that’s most important,” he said, after he steered the Douglas Whyte-trained Falcon Turbo in the Class 3 Guangdong-Hong Kong Cup Handicap (1200m).

His single-minded approach was evident from the start when the Mauritian teamed with long-time backer Tony Millard in the opener. Yee Cheong Lucky powered away down the straight to take the Class 5 Racing Goes On Handicap (1200m, dirt) by three and a quarter lengths.

Teetan then rated True Legend perfectly from the front and the Frankie Lor-trained gelding had enough in reserve to hold off the attentions of the Moreira-ridden Monkey Jewellery.