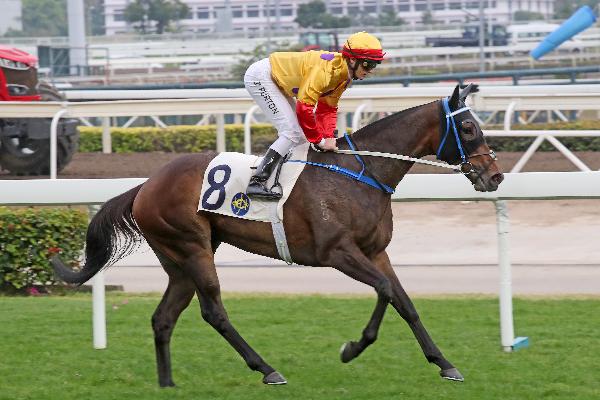 It’s 10 years since Caspar Fownes beamed in the afterglow of Super Satin’s moment of BMW Hong Kong Derby (2000m) glory and on Sunday (22 March) the handler will look to another talented Kiwi to end his decade-long wait for a follow-up.

Columbus County will attempt to follow the lead of his Fownes-trained predecessor and enhance the remarkable record of New Zealand-bred gallopers in Hong Kong’s HK$20 million blue riband.

Nine horses born in the ‘land of the long white cloud’ have captured the Derby this century — make that six of the last 10 and three of the last four — including two of the all-time greats, Vengeance Of Rain (2005) and Ambitious Dragon (2011). That makes New Zealand the number one producer of BMW Hong Kong Derby winners since 2000, with British and Irish bred gallopers taking four wins apiece and Australia having produced three winners.

“You’re always a chance with a quality New Zealand-bred horse,” Fownes said. “They produce so many great stayers, they’ve had so many that have won big races in Australia over the years, and also in Hong Kong.

“They’re tough horses and just look at how many good horses have come to Hong Kong from there over the years — Able One, Ambitious Dragon, Beauty Generation.”

Fownes is hoping the Kiwi trend will help tip the scales his way when his progressive bay steps out against the brilliant Golden Sixty and 12 others in the final leg of the Four-Year-Old Classic Series.

“Columbus County is still raw, he has potential once he starts to fill his brain, but we can’t knock him for what he’s done. He’s been a bit unlucky in his races, he should have had his win but that’s racing — he’s got to the Derby and so he’s given himself a chance,” he said.

Comparison is the thief of joy, or so the saying goes, but it also happens to rest at the core of any sport; and while Super Satin’s pre-Derby rating of 106 is lower than the 109 pre-race average of winning horses going back to 1995, Columbus County’s mark of 91 would make him the equal lowest-rated winner in the same period — the same mark as Che Sara Sara back in 1996, a time before Hong Kong’s ‘handover’, when even the ratings landscape was a tad different.

But even the added fact that no horse rated lower than 100 has won the Derby since Keen Winner in 2000 is not dampening Fownes’ hope.

“He’s had a nice lead-up with four runs, he’s acquitted himself well each time and, for me, he’s the horse that’s on the fourth or fifth line if we’re being realistic; but, in saying that, I think he’s a horse well capable of getting a rating into triple figures,” the handler said.

The Redwood gelding has shown plenty of promise, placing second in his last three runs, having proved his innate quality back in his homeland. In only three New Zealand runs for trainer Lauren Brennan, he bagged a mile maiden and was third in the G2 Waikato Guineas over the Derby distance.

“He’s lightly-raced,” Fownes continued, “he only had the three runs in New Zealand and we saw he had potential, so we bought him. They come here and it’s tough because they’re rated low-80s and they have to keep building. He’s earned his Derby spot and that’s nice for the owner, so hopefully he’ll acquit himself well.”

Super for the Kiwis

Columbus County is not the lone Kiwi in the field: Super Oasis and stablemate Reliable Team, and Star Performance all come with a NZ suffix.

Of that mixed quartet, Super Oasis arrived at Frankie Lor’s stable with a solid Derby resum&eacute; — wins in the G2 Auckland Guineas (1600m) and G2 Avondale Guineas (2100m) on home soil, plus third in the G1 Australian Derby (2400m). But he too will need to lift off a rating of 91 after five Hong Kong runs without success.

“This season Francis (Lui) has the two good horses, Golden Sixty and More Than This, and they will be hard to beat but I still need to prepare my horses for the race and I hope they can run well,” said Lor, whose maiden Derby win came last year with the New Zealand-bred Furore.

“New Zealand has some very good horses, I think usually they say Australia should be a bit better than New Zealand but you can see maybe it’s changed a bit, the New Zealand horses are coming up here and they love the distances.”

“They do well at that sort of distance — if the Derby was run over 1200 metres we wouldn’t be winning any that’s for sure!” quipped O’Sullivan, who also trained Hong Kong’s New Zealand-bred champion sprinter Aerovelocity.

“It’s satisfying to see, for the home (New Zealand) bred horses, they’re cheaper than the English counterparts. English horses, if you get the right one, they’re very good but I think New Zealand horses probably adapt better and they’re more likely to adapt to the conditions here — hard tracks and that sort of thing — but they represent better value for sure.”

This time, though, the handler will rely on an Australian-bred import, Amazing Beats, winner of the Listed Tasmanian Derby and placed in three G2 contests, but only 15th in the G1 Australian Derby.

“Amazing Beats will keep grinding away, I don’t know if he’ll pick himself up and sprint like Vital King could for me but he’s a stayer, he’s well and if there is a chink in the armour of a few of them then well he can get some prize money and that’d be great,” O’Sullivan said.

“Vital King was a pretty smart horse but he used to bleed and that really limited him in the finish, but he had a good turn-of-foot, he could really pick himself up and sprint.”

A major Derby win anywhere is a glorious thing, a difficult feat to achieve, and while the Australian-bred Golden Sixty heads into this year’s race in a clear pole position, the record book shows that you can’t ever discount a Kiwi in the BMW Hong Kong Derby.