Flash Famous shoots for a five-star night at the Valley 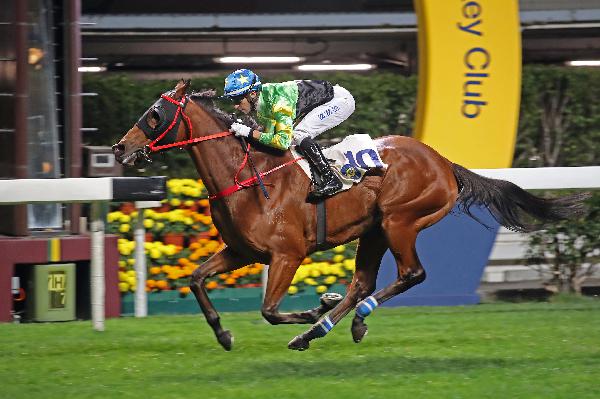 By Declan Schuster
Frankie Lor heads into Wednesday’s (29 April) Happy Valley meeting with course specialist Flash Famous looking to become the first horse this season to win five races at the city circuit when he contests section one of the Class 3 Fortress Hill Handicap (1650m).

The trainer is fresh off a G1 Chairman’s Sprint Prize success with Mr Stunning on Sunday, and is hopeful that Flash Famous can continue his rich vein of form and leave behind the season’s other four-timer Valley scorers, Very Sweet Orange and Amazing Star.

The Australian-bred was a two-time winner pre-import in Australia but from 23 runs across his first two Hong Kong seasons he could only manage one win. This season he’s been a revelation though and sits on four wins from seven runs, all over 1650m under the lights.

Jockey Joao Moreira credits the upturn to Lor, whose expertise was apparent with Mr Stunning returning to his G1-winning best of season’s past with Sunday’s 20/1 win.

“Frankie has turned Flash Famous’s form around, he has improved, for sure, and there’s no doubt that he’s capable of winning more races. I’m confident about him giving me another one in the Class he’s in at the moment,” the Brazilian ace said.

Lor’s charge arrived in Hong Kong on a mark of 71 and dropped down to 59 for his first win before his last-season struggles saw him hit a career-low of 45. He has since lifted to 70, cementing a place in the middle of Class 3.

“He’s held his form really well this season and I just keep him at Happy Valley over 1650 metres because he always seems to get good results there,” Lor said.

“He arrived in Hong Kong in Class 3 and he found it a bit hard, he didn’t race too well and then in Class 4 he got the win and last season I had to try a lot of different things but he’s much improved this season, he just needed that time.”

Moreira has two wins aboard the Ilovethiscity gelding, and the pair will break from gate two this time. The ace rider has 107 wins to his name this term to lead the championship, 28 of which have come at the city circuit.

“I think it was a very good run last time, we were a little bit unlucky that we couldn't get the momentum at the right time because he’s a momentum type of a horse and if I had got the momentum he would have won. Based on that, I’m going into the race with plenty of confidence,” Moreira said.

Lor and Moreira will also team up with Heavenly Thought in the second section of the Class 3 Fortress Hill Handicap (1650m).

The So You Think gelding was a G3 winner pre-import in Australia and placed second behind current stablemate Dark Dream in the 2018 G1 Queensland Derby (2200m), but he took 18 starts to break through in Hong Kong.

“I always said, Conghua is a good place for some horses, some horses have issues or problems, we send them up to Conghua,” Lor said, crediting the mainland training facility for the gallopers noticeable turnaround in form this season after going unplaced from 11 attempts last campaign. This season, Heavenly Thought has five top-three finishes from nine runs, including one win.

“It’s more relaxing up there, the place is quiet; they have lots of spas and treatment for the horses which is very good, especially if they have an injury.”

Lor enjoyed an impressive beginning to his training career with 130 wins across his first two seasons, though the pace has slowed this term with 33 wins.

“After the last two season’s everyone said 65 winners again, but you cannot always get 65 winners; when your horses’ ratings are going up it becomes very hard,” Lor said.

“Also, the new horses come in and you can’t push them too hard, so you have to take it step by step, very slowly and then if they come up healthy and sound, then they should run good.”

Lor also confirmed the retirement of Mr Stunning following Sunday’s G1 victory, his third at that level and 12th win from 30 starts for earnings of HK$60,843,100.