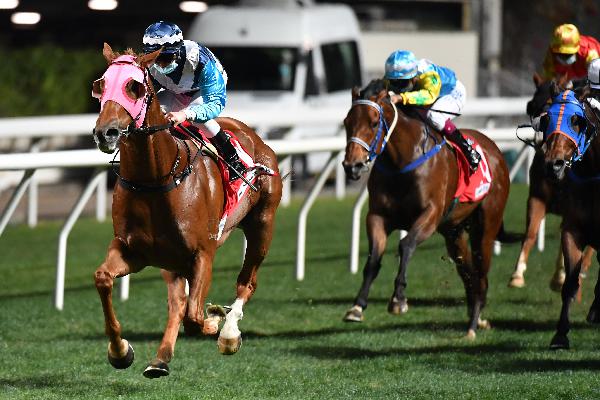 Proving adept at opposite ends of the age and potential scale, Lui logged a trio with veteran Winston’s Lad, emerging sprinter Stock Legend and the talented Igniting to move into outright fourth on the trainers’ premiership with 29 wins for the season.

Typically measured in post-race analysis, Lui was delighted with Stock Legend’s success in section one of the Class 4 Sam Chuk Handicap (1200m), predicting the Sidestep gelding still has plenty of scope for improvement given sometimes costly racing manners.

“Last time even when he won the race, he had a really bad habit of missing the start and he had his head turned on the side, doing all the silly things,” Lui said.

“We took the time to educate him and also Joao (Moreira) is a big help - he helped teach him.”

Nine-year-old Winston’s Lad notched his ninth win in Hong Kong, boosting his earnings to HK$7.67 million. The Churchill Downs gelding arrived in Hong Kong on a rating of 67, eight months before his debut win.

“He also took a long time to pick up his first win, but now he’s really honest,” Lui said before addressing questions about Golden Sixty ahead of Sunday’s G1 Stewards’ Cup (1600m).

Lui rounded out the program on a high when Igniting sped to the lead in section one of the Class 3 Sheung Hei Handicap (1200m) under Zac Purton – and was never headed in a striking performance.

Lui said Hong Kong Classic Mile contender Lucky Patch was on the improve and confident the four-year-old would have no trouble getting 1600m.

Moreira maintained his lead in the jockeys’ premiership by completing a race-to-race double in the Class 3 Tai Yau Handicap (1650m) on John Size-trained Wealthy Delight.

Moreira now has 72 wins for the season, 21 more than Purton, who passed the seasonal 50-win milestone by successfully combining with David Hall-trained Oversubscribed in the Class 5 Ng Fong Handicap (1000m).

Moreira’s Brazilian compatriot Vagner Borges boosted his haul for the term to 15 after combining with Size to land the second section of the Class 3 Sheung Hei Handicap (1200m) with Scores Of Fun – the trainer’s fifth winner from 10 runners in a searing stable streak.

Caspar Fownes isolated Neil Callan’s ride as a decisive factor in Fast Pace’s victory in the Class 4 Sze Mei Handicap (1650m), the Savabeel gelding’s second win over the trip at the city circuit.

“The horse has been racing very consistently. Hopefully they will leave him in the class because I thought he was a bit hard done getting two points for running third the other day.

“Hopefully they’ll leave him with a five-point penalty and be left with at 60 where Neil can ride him. He’s a bit of tough horse so he needs someone strong on him.

“Having said that, he’s starting to get there mentally and starting to know his trade a lot better the last few times.”

Fownes, who leads the trainers’ premiership by seven, was especially pleased for owner Fong Chi Keung.

“We bought the horse from the International Sale and he did a tendon pretty much straight away, early in his career and he was out for a long time,” Fownes said.

“So, for the owners to be patient and get that result - it’s wonderful.”