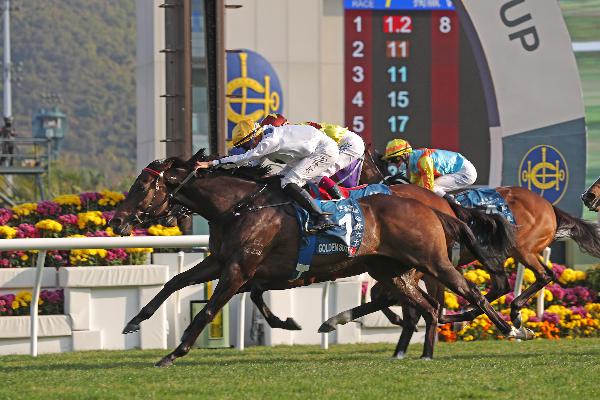 By Leo Schlink
A leisurely 1200m barrier trial has filled Vincent Ho with confidence that Golden Sixty remains on target to extend an imposing winning sequence to 13 with a third G1 triumph in the Citi Hong Kong Gold Cup (2000m) at Sha Tin on 21 February.

Placed under no pressure at all, Golden Sixty finished seventh in an eight-horse trial over 1200m on the dirt at Sha Tin, crossing the line eight lengths behind Ka Ying Star, who clocked 1m 09.58s for the trip.

Preparing for a return to 2000m for the first time since the 2020 BMW Hong Kong Derby, Golden Sixty delighted Ho with an unruffled trial effort after his narrow last-start triumph in the G1 Stewards’ Cup (1600m) over Southern Legend on 24 January.

“He felt really good, I’m happy with him,” Ho said. “I just let him stretch out with the faster pace, just kept him happy.”

Ho, who has been aboard Golden Sixty in all of his 15 wins (from 16 starts), said trainer Francis Lui had adopted a more relaxed approach with the star gelding, who is bearing down on Silent Witness’ record of 17 successive Hong Kong victories.

“Pretty similar (preparation), but he has been more relaxed work-wise, which has been good,” Ho said of the five-year-old’s work.

“He feels really well, looks really well and, as usual, he can be a bit grumpy in the box but out here, he’s really curious and looks around.”

Joao Moreira was equally satisfied with Waikuku, who finished sixth in the same trial, in readiness for the world’s richest 1400m race – the HK$12 million G1 Queen’s Silver Jubilee Cup (1400m) at Sha Tin on 21 February.

“Good enough trial for me, no doubt he needed that. It’s been quite some time since his last run,” the Brazilian said.

“As you know, he doesn’t really trial outstanding and every time he does that he goes to the races, he performs at his best.

“He’s in good shape and in good form. He’s had two runs already this season so now he should be nearing his top fitness and I’m expecting nothing else than him performing very well and who knows, he might be the winner.”

One of nine entries for the second leg of the Hong Kong Speed Series, Waikuku has contested eight consecutive 1600m races since his last 1400m outing – a third behind Beauty Generation in the 2019 G3 Celebration Cup Handicap – but Moreira is unfazed by the drop in distance.

“I think that will be ok - he’s got good gate speed to be close enough,” Moreira said. “He just needs to run up to his very best because he’s up to the class, he’s up against the same horses he’s been up against every day and if he performs at his best, he could be the winner.”

Blake Shinn is optimistic Hong Kong Classic Mile winner Excellent Proposal can continue to thrive after crossing the line in eighth place in the same trial this morning.

“There was plenty of speed in the trial so we drifted back and he worked through the line nicely under his only steam.&nbsp;It was a nice trial,” Shinn said as the pair built towards the HK$12 million Hong Kong Classic Cup (1800m) at Sha Tin on 21 February.

“He seems to have come through his last run well, it was a very strong heat here this morning so we weren't out there to break any records but he did his job well.”