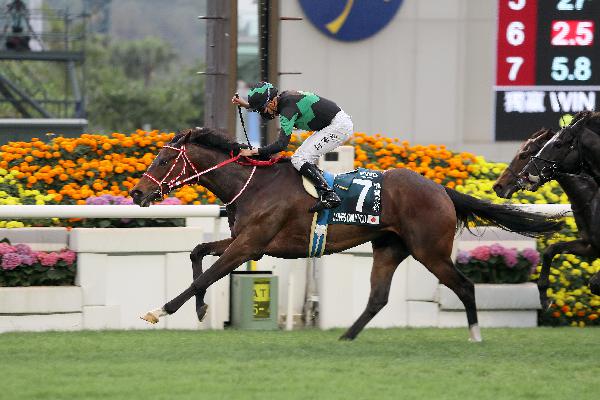 By Declan Schuster
Gearing up for his toughest test to date and the chance to create history, Hong Kong’s Horse of the Year Golden Sixty will step away from barrier two in Sunday’s (12 December) HK$26 million G1 LONGINES Hong Kong Mile (1600m), much to the satisfaction of trainer Francis Lui at this morning’s (Thursday, 9 December) barrier draw at Sha Tin.

“He is all ready and we’re hoping that luck will come to my team and my owner - and to me too,” Lui said. “Barrier two is ok - we’ll just relax him and wait for the straight, and then we can just let him go.”

This weekend, the six-year-old son of Medaglia d’Oro will bid to extend his winning thread to 16 and his overall tally to 19 wins — a new local record in Hong Kong.

“We are very happy with him, he came out of that first run very well - in that race over the first 800 (metres) the pace was very slow, that gave the other horses a little trouble but Golden Sixty, he just has a very good turn of foot now - he knows where the finish is.

“Honestly, the trials he’s had didn’t show much. I think he hadn’t run for a few months’ time and when it came time to run that first time he showed he is more mature, more relaxed and more comfortable,” Lui said.

Golden Sixty shares the current mantle of 18 wins in town with Silent Witness and Beauty Generation. And Lui describes the quirky but incredibly talented gelding as the horse of a lifetime.

“In all of a lifetime I think you can’t find this kind of horse. I’m lucky and Hong Kong is lucky to have him too,” he said.

Golden Sixty will have his final gallop tomorrow (Friday, 10 December) at Sha Tin with Vincent Ho aboard in the early hours of the morning.

Gearing up to lead the home team’s defence of the HK$30 million G1 LONGINES Hong Kong Cup (2000m), Panfield will break from gate one against 11 rivals from Japan, Great Britain, Ireland and Hong Kong as he looks to bounce back from an unexpected form blip last month.

Speaking at this morning’s barrier draw at Sha Tin, trainer Tony Millard walked away pleased as he eyes Hong Kong’s most lucrative race in three days.

“It’s a lovely draw, it gives you options and we’re certainly very happy with it, there’s a lot worse draws than that — I couldn’t be happier,” he said.

Bred in Chile and raced there to a hat-trick of G1 scores, Panfield added to his burgeoning record with victory in last season’s G1 Standard Chartered Champions & Chater Cup (2400m).

And upon resumption this campaign, Millard wound the son of Lookin At Lucky up masterfully to win the G2 Oriental Watch 60th Anniversary Sha Tin Trophy Handicap (1600m) — his first start after scoring over 2400m at the top level last term.

“He’s been good since that last run, frankly speaking that last run, it was one of those races that you want to forget and we’re just looking forward.

“He’s come through his preparation well, he had a nice gallop the other day and this morning he sprinted up well, he’s a fresh horse, so it’s going to be a question of whether he is good enough,” Millard said.

“The Japanese — they’re just outstanding horses and they’ve travelled around the world, so it’s going to be a good yardstick for us to see where we are but I’m certainly happy with my horse — he’s done everything that I have wanted,” he said.

“So, it’s the same scenario with Panfield, he was the best horse in the race when he won the 2400 (Champions & Chater Cup) but we decided to go for the race that is best suited for him,” Millard outlined.

Nearing the 700-win mark in Hong Kong, Tony Millard has enjoyed a fine career in the Far East since his arrival from South Africa over 20 years ago.