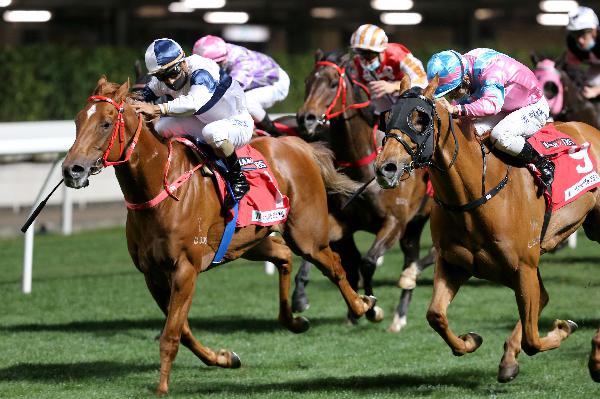 If the Reward For Effort gelding is again successful, and Grateful Heart finishes outside of the top two in the Class 1 Blue Pool Handicap (1200m) two races earlier on the night, Scores Of Fun will clinch the DBS x Manulife Millions Challenge – and the HK$650,000 first prize.

Grateful Heart (66) holds a nine-point lead over Scores Of Fun (57) heading into the final round of the series.

Under the points format of 15 for the win, six for second, four for third and three for fourth, it is mathematically possible for both Scores Of Fun (if he won) and Grateful Heart (if he ran second) to finish on 72 points.

Under that scenario, Grateful Heart would claim overall victory from Scores Of Fun because he will have posted more victories – four to Scores Of Fun’s two so far – in the competition.

Size and Grateful Heart’s trainer Danny Shum have claimed four of the past five the DBS x Manulife Millions Challenges and Size is hopeful Scores Of Fun can prevail after triumphing at the city circuit last Wednesday.

“He’s been in very good shape as the form guide tells you, he goes to the races consistently and he runs the same race every week, so those horses who are consistent all the time, they’ve always got something else up their sleeve,” the Australian said.

“He wouldn’t surprise me if he ran another good race.

“There’s nothing wrong with him, otherwise he couldn’t come back within seven days.

“His form, he manages to maintain it - he’s consistent and, again, he’ll have a chance of winning a race.”

To carry 133lb for Brazilian jockey Vagner Borges, Scores Of Fun edged out Shouson by a nose at Happy Valley six day ago and, by dint of the narrow margin, climbed five ratings points from 80 to 85 to remain in Class 3.

“Things have worked in his favour a little bit - he won the race last week by a very small margin so that enabled him to still be in the grade, which was unusual, he just happens to be there at the right time,” Size said.

Zac Purton lauded Danny Shum’s transformation of Grateful Heart, who has risen 31 rating points this season to a mark of 96 ahead of the series finale.

“He showed a bit of ability early on, but he wasn’t able to put it together in races,” Purton said of the Written Tycoon gelding.

“Danny, like he has with a lot of his horses this season, has managed to get the best out of him.

“He’s racing really well, he’s full of confidence. He’s done a great job and let’s hope he can top it off with the Challenge win.

“He’s got everything you need at the Valley, he’s got great speed, he gets around the corners really well and he can kick off the bend so that has been clearly been an asset for him.”

With HK$250,000 on offer for the runner-up, six horses could over-take Igniting (40 points), who is not entered tomorrow night, and claim third place and a HK$100,000 prize – Kurpany, Flying Genius, Explosive Witness, Handsome Bo Bo, Reel Bizzy and Tashidelek.

Size will look to cement leading position in the trainers’ championship. The 11-time champion is nursing a one-win lead over Caspar Fownes, 44-43, but with 40 meetings left to run this season, Size is taking nothing for granted.

“It’s just too far out. It’s (the season) only a little bit halfway and there’s a lot of trainers training very well,” he said of the battle for the title.

“The top six trainers in the championship and others as well, they’re having really good seasons - it’s quite competitive.”