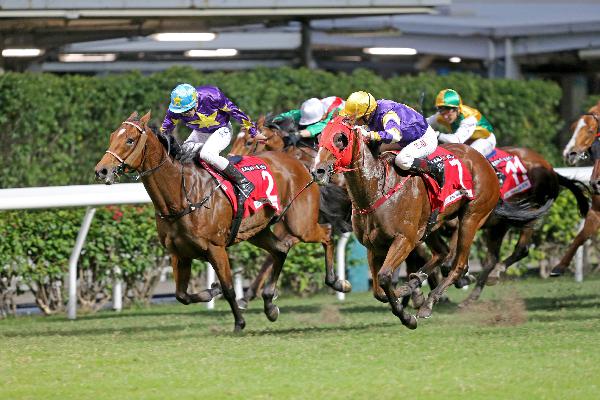 By Declan Schuster
Alexis Badel fired home a double to bookend Sunday’s (8 November) 10-race card at Happy Valley which he capped with a gritty success aboard Golden Dash (119lb) in the Class 2 Fenwick Handicap (1200m).

“He’s a nice horse - I don’t think I gave him the best ride but he’s a big horse with a great action,” Badel said, “I was a bit beaten for pace at the beginning so I stayed a bit wide and when the pace slowed I kept improving to let him roll and keep the momentum.”

The gelding broke evenly from gate six but from there travelled three-wide throughout and was entitled to throw in the towel but he dug deep for a tough short-head win ahead of Shining Gem (128lb), while favourite Highland Fortune (121lb) nabbed third.

“He’s a very nice horse, as long as you give him a chance at the start he’ll keep rolling and rolling - he never stops,” Badel said.

The Danny Shum-trained six-year-old is now a five-time victor from 17 starts, but his career hasn’t been smooth sailing as the talented son of Snitzel has twice been found to have substantial blood in his trachea, while also overcoming a leg issue last year.

“We have to look after him - I always scope him, watch his body weight and make sure to keep him happy,” Shum said.

Today’s double moves the French rider to 11 wins this season and sixth place on the jockeys’ championship table.

“I’ve got great support from different trainers - I keep working hard and I’m trying my best to deliver and give all of my horses every opportunity,” Badel said, “I’m doing a lot of homework to get the best rides and as well it’s about being in the right place at the right time.”

Badel kicked off his double with victory in the opener, the Class 5 O’Brien Handicap (1650m) aboard Virtus Star for trainer Frankie Lor who also landed a double.

“He’s getting confident and more mature, he is in good form and mentally he’s very tough now so I hope he can rip it again, even in Class 4,” Badel said.

Lor’s double was sealed thanks to a well-judged front-running ride from Vagner Borges which saw We The South home in the Class 3 Fleming Handicap (1000m).

“We had a good draw and even though we’re up to Class 3, he had a light weight which made it easier, he needs to lead instead of being behind horses,” Lor said.

Valley firsts for Hayes and Shinn

David Hayes and Blake Shinn scored their first wins at Happy Valley this season as the duo combined with Fearless Fire who scored a win full of merit in the Class 4 Lockhart Handicap (1650m).

“It was a tough effort — we drew an awkward barrier. David (Hayes) wanted to go forward but there was just too much pressure in the early stages,” Shinn said.

The Acclamation six-year-old was caught wide early on from gate 11 but a cool collected Shinn slowly edged the gelding closer to the front in the run, before taking over at the 450m mark for a half-length success.

“I had no option but to be wide early on, so I just kept his momentum as best I could and it was an amazing win, the horse did an incredible job,” Shinn said.

“Last start he was a bit unlucky, he got blocked when it mattered and I thought he was very fit and he had to be because he ran 1800 metres today and he was still able to win. When they can travel wide without much luck sometimes they can win another one, so let’s hope he can put two together,” Hayes said.

Chad Schofield moved into double figures with his 10th triumph this season as Lucky Quality scored handsomely in a quality second section of the Class 3 Johnston Handicap (1200m) to complete a double for championship leading trainer Caspar Fownes.

“We did a bit of work into the first turn, a number of them dug up inside of me and I was wide and working but eventually we got into a nice spot but I was worried mid-race after the work that we had done,” Schofield said.

The Medaglia d’Oro gelding was caught wide early on and settled midfield before peeling out at the 300m mark to record a length and a quarter success.

“He’s a horse who has come a long way, he used to be a barrier rogue and Caspar (Fownes) has done a great job with him - his manners are a lot better this season, he is improving, he is young and I like the feel he gave me today,” Schofield said.

“It’s a big thrill to get one for Mr. Leung Kai-Fai. I’ve been riding for him in his colours since I was 17 as an apprentice. I’ve ridden lots of winners for him in Australia and I’m very happy to get another win for him,” Schofield said.

Vincent Ho nicked a race-to-race double and kicked off the Fownes double as Nunchuks claimed the Class 4 Luard Handicap (1800m) before Shining On landed the first section of the Class 4 Johnston Handicap (1200m), the first of a double for trainer Francis Lui.

“Shining On is an extremely honest horse, he always tries his best and he won by a short margin — he’s a small horse but he has a big heart,” Ho said.

“He deserved it - he’s been an honest horse, it’s always hard for PP’s (Privately Purchased Horse) when they come in on a high rating as we know,” Purton said.

“He’d been knocking on the door and unfortunately he bled last time. Francis (Lui) has done a good job, giving him time off and to get him to win first-up today - he’s given him a good grounding in Conghua and it showed,” Purton said.

Peter Ho landed his second win this season as Viva Chef swept to victory in the Class 4 Jaffe Handicap (1000m) under Matthew Poon.

“He had a beautiful gate and I thought really helped him. When the pace picked up he came off the bit and I had to work him but he finished off the race really well — I don’t think we have seen the best of him yet, he’s young and still improving,” Yeung said.