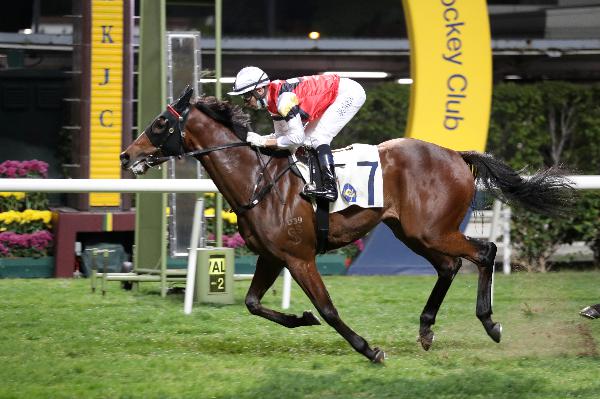 Stock Legend is shooting for a hat-trick of wins.
Hong Kong Jockey Club

By Leo Schlink
Undaunted by a wide gate, Joao Moreira believes Stock Legend has the ability to overcome the obstacle and notch a third straight win in the Class 4 Orchid Handicap (1200m) at Happy Valley on Wednesday (10 February).

Winless in 10 starts after arriving from Australia, the Sidestep gelding has blossomed this year for Francis Lui with successive 1200m victories at the city circuit.

Drawn in gate 12 under top weight of 133lb, Stock Legend faces a difficult task but, according to Moreira, it is not insurmountable.

“Even though the gate is not helping us very much, I still believe he’s good enough to win the race,” the Brazilian said.

“I respect some other horses in the field but the way that he did win last time, that gives me confidence to go into the race – even with the outside gate.

“We’ve got a good winning chance.”

Moreira, who commands a 27-win lead over Zac Purton in the jockeys’ championship, has faith in the four-year-old’s ability after two strong victories.

“He surprised me the way he won (on 20 January) because I didn't really have to touch him,” he said.

“He was ready, he was feeling good in himself and he delivered so I couldn't ask much more than that.

“I have actually done a lot of work on him. Francis asked me to help out and I was more than happy to sit on the horse because I think he is a good horse.

“He was just doing a few things wrong, particularly at the start when he would jump out towards the outside.

“Doing that work has been good but because I understand what kind of horse I will ride at the races, so I know what to expect.

“To be honest, lately he hasn't been doing anything wrong. It appears he might do, but then we correct him and put him on the right path - he has been responding well.

“We did another piece of work down at the gates with him two days ago and he actually responded well. If he brings what he has been showing us to the races I think he will be straightforward.”

“He’s given a good impression. I’ve never partnered him in his trials, I’ve done a couple of gallops on him,” Schofield said.

“His trials were really good - he’s a different horse to having blinkers on and off,” Schofield said.

“The first trial (5 January) he had no blinkers and then the second one, he wore blinkers and he really switched on.

“I’m looking forward to riding him.

“He’s pretty lazy (but) he’s got a good attitude for Hong Kong, he conserves his energy nicely and he knows when the blinkers go on, it’s time to switch on.

“From the good gate we have, he should get a lovely run and should run well.

Parterre finished fourth in the G1 Cape Derby (2000m) at Kenilworth in Cape Town in February, 2020.

David Hayes is banking on a gear change to provide Beauty Kobe with a decisive edge in the Class 3 Cineraria Handicap (1200m) after three improving runs in Hong Kong.

“He has taken a couple of runs to adjust but I thought his last run was full of merit when he finished third, he seems to like the Valley,” Hayes said.

“I think putting the ear muffs on him has helped him a lot because he was a little bit aggressive in his first couple of races.

“He's been solid, there are no suggestions that he has gone backwards at least.

“Not many Valley races go slow so I'd say he will sit in the first five or six and get cover to be strong late.”