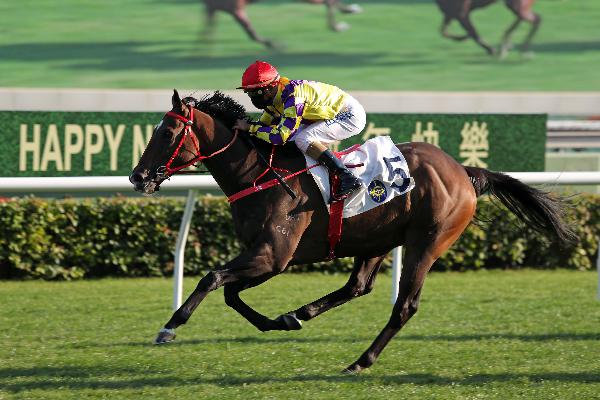 Beaten by Hong Kong banner horse Golden Sixty at his three previous starts, Champion’s Way benefited from Size’s decision-making on Sunday when he was given a superb ride by Karis Teetan to down the luckless Sky Darci and Mighty Giant.

Size attributed the gelding’s first victory since June 2019 to a drop in class, conceding the five-year-old struggles at elite level.

“I think they’re too strong for him and he’s just wasting his energy,” the Australian trainer said of Champion’s Way’s inability to add to the six victories (from seven starts) he posted in the 2018/19 season.

“At least he’s won another race, which we were hoping to do.

“He’s found Class 1 racing and group racing a little bit difficult for him and today circumstances suited him - the run of the race and track condition – so he was able to do his best.”

Teetan followed Size’s instructions to the letter, clinging to the rail and avoiding the buffeting endured by Sky Darci from the home turn.

“John just said to ‘Don’t do any work, come out of the good gate (two) and leave him alone, the pace should be on, sit on the rail and wait’,” Teetan said.

“I must say John had the horse in really good form and he had a lot to offer in the straight. It was a good win.”

Teetan was previously successful aboard Fifty Fifty for Peter Ho in 2018.

Caspar Fownes extended his lead in the trainers’ championship over Frankie Lor to 37-30 after triumphing with Master Fay, Explosive Witness and Royal Bomb.

The handler was rueful after Sky Darci’s second behind Champion’s Way but was delighted with the lightly-raced gelding’s performance.

“I’m very happy with him,” Fownes said. “He was poleaxed on the turn but he’s right where he needs to be for the Four-Year-Old Classic Series.

“He’s learning how we want him to race and provided he’s alright after today’s run, he’ll be back here on 24 January (for the Hong Kong Classic Mile).”

&nbsp;“He’s a very nice horse, he’s not too straight-forward. He’s got a couple of little things he does which are a little bit naughty,” Fownes said.

“So, we took our time with him to teach him. Even today, he came out of the gates a little bit slow but he’s got some brilliance. He’s got a lot of class so he’s the type of horse who’s got a very good future.”

With a winning margin of two and a half lengths, the son of Deep Field might have been even more conspicuous on debut if not for Moreira suffering the late inconvenience of losing a stirrup.

“The most important thing is he’s got the engine and a couple of months we might have something quite nice,” Fownes said.

Badel notched his first treble at Sha Tin since 14 November as the Frenchman piloted home Explosive Witness (Fownes) and Charity Grace and Namjong Sings (both for Danny Shum).

“His condition is good and his last run was good,” Lui said. “He got a good draw (barrier one) today and that helped.”