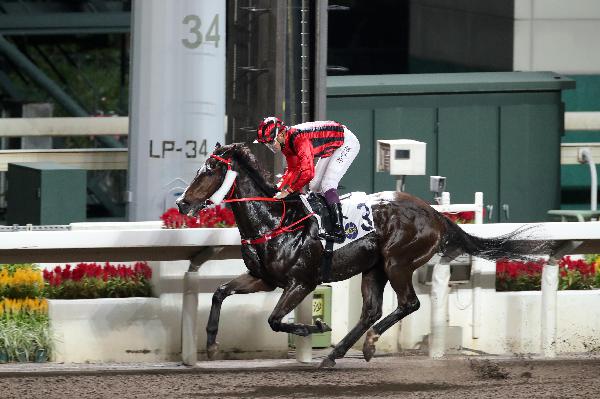 Vaulting to within a win of David Hayes (14 victories), Lor and Ting boosted their tallies to 13 for the term after their in-form stables completed bountiful October stints with nine wins each, as Tony Cruz (10 wins) joined the title log-jam with Party Everyday’s success.

The 14th meeting of the season delivered an unexpected bounty for Brazilian Maia, who capitalised brilliantly on limited opportunities to land his first brace since relocating from Singapore last season.

“I’m very, very happy,” Maia said. “This is my first double in Hong Kong and I am extremely grateful to Francis Lui, Manfred Man and David Hayes and the other trainers who have given me opportunities.

“I have not had many rides this season (30), but I will continue to work hard and try and get more support. This is very satisfying.”

Lor, who was second in the 2017/18 trainers’ championship behind mentor John Size, took training honours at the all-dirt meeting.

Posting his fourth victory over the 1650m All Weather, and his second successive triumph in the Hebe Hill Handicap, Kings Shield might be given the chance to prove his wares overseas as Lor ponders options for the gelded son of Scat Daddy.

“Dubai is in March so there is still plenty of time and we don't know if they will be open or not,” Lor said. “We don't know how many points he will get - maybe five or six. If he moves to 106, maybe we need to race him on the turf, or I think in December they have 105-80 again over 1650 (metres) but it depends how many points them give him.

“I think the jockey (Leung) did a good thing, we got draw three and (Zac) Purton was in draw four so I told the jockey that we needed to jump first and hold the rail to see if Purton's horse wanted to come across him and maybe then he would use a little bit. That is maybe the point we won the race.”

Leung said the key to success in the programme feature was tempo.

“It was important for him to get into his rhythm, everyone knows he is good on the All Weather,” Leung said. “It was an advantage for us to have a soft lead and he was always going to have a good chance.

&nbsp;“Last season, he had a serious bump in a race at the 400 (metre mark) and he lost his confidence and he lost his heart. It’s been a long way to bring him back. Even today, although he was a bit weak in the last 100 (metres), he was strong overall in his performance. I hope he can back up and go ahead after this race.”

Lor hopes Sha Tin’s All Weather surface is the key to The Elites after the gelding’s breakthrough victory in the Class 5 Tsim Mei Fung Handicap (1200m) under Vagner Borges.

“He likes this surface and he also ran well on it last start, he ran second, which was a big improvement,” Lor said. “His rating fell to 18, so it’s good to see him win like he did.

“He had a fall at Happy Valley last season and I think it’s taken a long time for him to get his confidence back.”

Ting continued impressive impetus after Lucky Victor was given a brilliant ride from gate 13 by Keith Yeung to snare the Class 5 Wa Mei Shan Handicap (1800m).