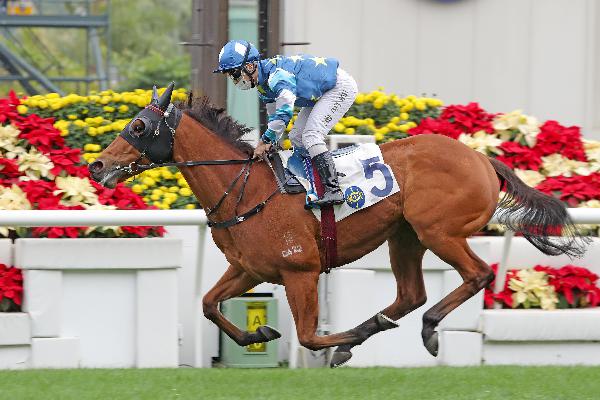 By Declan Schuster
After clean-sweeping last season’s Four-Year-Old Classic Series with the brilliant Golden Sixty, trainer Francis Lui is looking to Lucky Patch (117lb) this time around and Sunday’s (10 January) Class 2 Choi Hung Handicap (1400m) will see him lay out his credentials for a Hong Kong Classic Mile tilt in 16 days’ time.

“He’s good – he’s held his condition, he has a good draw and hopefully he can perform,” Lui said of the Australian import.

The El Roca gelding, formerly known as Paleontologist was a two-time winner in Australia prior to export, and has since raced three times in Hong Kong for two wins on the dirt and turf, including a comfortable Class 3 success last start over the course and distance.

“Based on how he won his last two races - I think he can handle Class 2 and he still has room to improve,” the handler said.

The New Zealand-bred kicked off his career with a debut win on the dirt and a rating of 69 and now, with three runs under his belt, sits on a mark of 83.

“Of course (to aiming for the Four-Year-Old Classic Series) - the Classic Mile but I’m not sure how he will go over further, I will see how he runs after the Mile,” Lui said.

Lui’s charge crossed the line first with an eye-catching barrier trial on the dirt at the end of December with local ace Matthew Poon, who again takes the reins, in the plate.

“I can’t say he’s an easy horse to train because he’s quite strong, he’s quite a muscular horse so you have to watch his weight, but you can’t cut his feed.

If you cut his feed, he doesn’t have the energy to run, so you have to check and maintain his weight through training,” Lui said.

Poon has paired with the youngster for both of his Hong Kong wins and this Sunday the duo will break from gate three against 13 opponents.

“He hasn’t had many starts and he’s shown ability, he’s in Class 2 for the first time but he’ll carry a light weight and he gets a good draw - I give him a chance - I think he will have every chance in the race, so let’s see if he can improve again,” Poon said.

While talented, Poon believes the gelding still has a lot to learn if he is to see out further.

“I don’t know how good he’ll be - he still has a lot to improve, he needs to settle a bit more and if he settles more, I think he’ll be able to race over further – that is, if he settles.

“Even in the straight he still isn’t quite balanced, he changes legs but hopefully with more experience he can be smoother and quicken up smoother,” Poon said.

Among Francis Lui’s five entrants for Sunday’s fixture is Cheerful Days, who contests the Class 4 Ngau Tau Kok Handicap (1600m) but does so with blinkers applied for the first time.

“This time we’ve applied the blinkers in the hope that it helps but still he has a bad draw - he has ability, and he looks as if he can stay over further distances,” Lui said.

And as for his stable superstar, Golden Sixty, Lui indicates a G1 Stewards’ Cup (1600m) tilt on 24 January as the Medaglia d’Oro gelding’s next assignment.

“He’s maintained his condition well and he’ll go to the Stewards’ Cup and I will give him a barrier trial next week,” Lui said.

This Sunday trainer Me Tsui will unveil the ex-John Gosden-trained Tsar in the Class 2 Choi Hung Handicap (1400m) and the handler has high hopes for his British import who is eligible the Four-Year-Old Classic Series.

“I have good expectations for him, he’s trialled well and after his last trial he looks as if he is going better - I hope so (to contending the Four-Year-Old Classic Series) it depends on his performance this Sunday,” Tsui said.

The Kingman gelding was a three-time winner pre-import, scoring at Newcastle, Yarmouth and down the straight at Ascot in his final run and, since his arrival in Hong Kong, he has trialled three times in readiness for his debut.

“He looks settled in Hong Kong - I am very happy with him,” Tsui said.

The 82-rater crossed the line third in his latest barrier trial and sets off from gate six with Derek Leung in the plate this weekend.