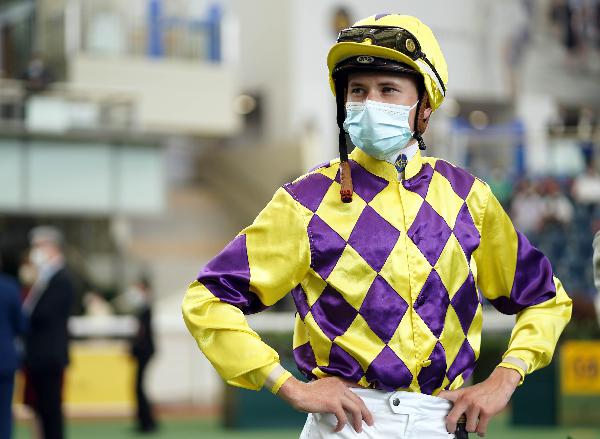 Stepping away gate four in the Class 3 LONGINES Cup Handicap (1000m), the New Zealand-bred pairs with the South African ace for the first time at the races, though the pair did combine for a stylish first-past-the-post trial effort earlier this month.

“He’s trialled superbly - he bounced out and just about led all-the-way - thankfully he’s pulled a smart draw, so hopefully we can use it to our advantage,” Ferraris said.

A four-time winner now, Tony Millard’s sharp sprinter has twice prevailed in Class 3, including his narrow first-up victory under Joao Moreira in September.

“His last win was gutsy - he’s carrying a bit more weight this time but he has the draw in his favour and hopefully with a bit of luck in running he can pull it off again,” the 19-year-old described.

Later on the programme in the finale, the Class 3 Telecom Fighters Handicap (1650m), Luke Ferraris gets the leg-up on Surrealism (124lb) for father David Ferraris.

The British-bred son of Exceed And Excel narrowly missed first-up by a neck to Fa Fa, who he meets once more.

“We were very happy, obviously he got touched off by the favourite in that run but he was hitting the line strong and he’s come through the run well,” Ferraris said.

“He’s a horse that likes to come from about midway, he’d rather be further back than further forward, so the draw’s not much of an issue, there’s a nice horse to follow on our inside and hopefully it all works out well,” Ferraris said.

The rider has worked Surrealism in the mornings and remains pleased with the horse’s attitude and work.

“He’s come through the run really well, he’s fresh in the mornings, he’s feeling good and you can see he’s moving well so it’s all systems go.

“He’s a little soldier, he gives 100 percent every time he comes to the races, so hopefully he does it again,” he said.

In the race, Karis Teetan will take riding duties atop Parterre, a South African import who finished fourth in the 2020 G1 Cape Derby (2000m) at Kenilworth prior to his arrival.

“I thought he ran good last time - he was first-up but he ran good, the pace was on and he had just enough over the last bit. He looks like a better horse this season, so it’s a nice time to get on him,” Teetan said.

Hong Kong is a challenging cauldron to crack but Ferraris has the proven pedigree and necessary skillset to flourish.

“I’m enjoying it thoroughly - the racing’s been good, I’ve got off to a fairly decent start and hopefully the momentum starts to pick up,” he said.

“You can’t ride winners without the horses under you and you need the support for that.”

By Mariko Seki
This year’s Japanese contingent for the upcoming LONGINES Hong Kong International Races on Sunday, 12 December features a stellar line-up of 12 horses, the second largest in history behind the 13 shuttled across in 2016.