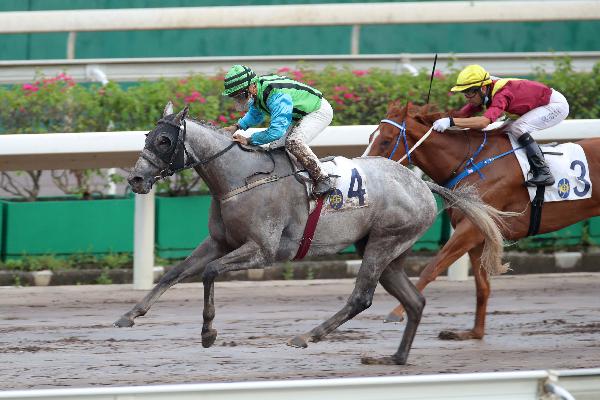 On a programme remarkable for the way Sha Tin’s two courses – turf and dirt – played after 485.4mm of rain since Friday (8 October), Millard outlined potential plans for Silver Fig as Jerry Chau posted his first win as a senior rider after graduating from his apprenticeship at Happy Valley on Wednesday (6 October).

Matthew Chadwick climbed into fourth place in the jockeys’ championship with seven wins after a treble atop Soccer Master, The Mint and Golden Link as Jimmy Ting took training honours with a double.

“It’s nice, I’m not complaining – the horses tried their best and I got the wins,” Chadwick said. “We’re just kicking along, hopefully a bit more support comes my way and I can keep producing.”

Ridden patiently by Matthew Poon, Silver Fig justified dual Hong Kong Derby-winning trainer Millard’s opinion of the gelding, whose talent has been compromised by health issues throughout his career.

“When he wins like that, he could be good enough to go to Dubai, but he has had his problems,” Millard said. “When he’s on song, oh my God, he’s just exhilarating when he’s like that.

“We just go from race-to-race with him, really. He’s not the type of horse that you can do any long-term planning with. He’s pretty exciting when he turns it on like that.

“He can just mow them down, doesn’t matter where he is. He’s not as good as Super Jockey, but he’s close. He’s not quite in that top group, but Super Jockey was world-class. This horse has got the raw ability.”

Taking a positive approach from barrier 11, Chau notched his first win as a freelance rider by steadfastly angling to the lead – and was never headed – with tactics applauded by 13-time champion jockey Whyte.

“Jerry and I went over it and barrier 11 or wider for this horse is probably the best draw. When he’s been drawn inside, he’s had to work too hard in the beginning and then he probably over-races and runs out of steam in the last 100 metres,” Whyte said.

“From a wide gate, he could get across comfortably at his own speed and he showed what he can do when he gets into a nice rhythm.

“He’s done a few things wrong and he’s a very big horse – he’s lanky and there’s a lot of him – so it’s taken time for him to adjust to the firmer tracks. Today, the key to his success was the give in the ground.”

Ruan Maia expressed his gratitude to Francis Lui after partnering Chancheng Prince to victory in the Class 3 Tsuen Fu Handicap (1650m). The grey was Maia’s 16th mount for the season, providing the Brazilian with his second success of the term.

“I’m very happy because I’ve had only few rides with limited chances to do something,” Maia. “It’s tough for me. I am very happy that Francis Lui gives me the chance to ride this horse for the first time. I am happy that I could produce a good ride and win the race for Francis.”

Richard Gibson savoured his second victory of the season when Soccer Master proved his affinity for Sha Tin’s seven-furlong trip, posting his third win over the journey to claim the Class 5 Tai Ho Handicap (1400m) under Chadwick.

Addressing Wellington’s issue, Gibson said: “I would describe it as a niggle, no one likes problems or niggles so he won't be running on the 17th and hopefully we'll get him sorted and we'll see him in November.”

Jimmy Ting extended a strong start to the season with a double after Keith Yeung dictated throughout on The Anomaly to land the first section of Class 4 Sha Tsui Handicap (1400m).

“I said ‘Keith, if there no horses to go in front, go by yourself. If there are some horses that go crazy, sit second or third’,” Ting said. “I think this horse has some class. He’s very competitive and he can still improve. He’s a nice horse.”

Ting armed Chadwick with similar instructions aboard The Mint and was rewarded with success in the Class 4 Tak Wah Handicap (1650m, dirt).

“It’s a surprise to win, but this horse didn’t like the kickback last start so I told Matthew to go forward to avoid the kickback and the horse ran well,” Ting said.

Typically deflective, Ting downplayed his slick start to the term with an eighth winner, saying: “I hope I can still continue to get some winners.”

“He has dropped quite a bit in the ratings, he was up around 90 at one stage,” Schofield said of the eight-year-old, who hit a career-high mark of 89 two years ago.

“Manfred had him fit and ready to go first up and he did a good job because we sat three-wide and he was tough late.”

Dennis Yip’s Sparkling Knight profited from a drop in grade when an effortless victor in the Class 4 Hoi Pa Handicap (1000m), clocking 56.10s on a course soaked with 485.4mm since Friday.

The Holy Roman Emperor gelding struggled in Class 3 last season, but blasted back into the winners’ circle with a dominant display under Alfred Chan.

Chadwick closed the programme triumphantly with a precise display for Ricky Yiu on Golden Link in the Class 3 Wo Tik Handicap (1400m).