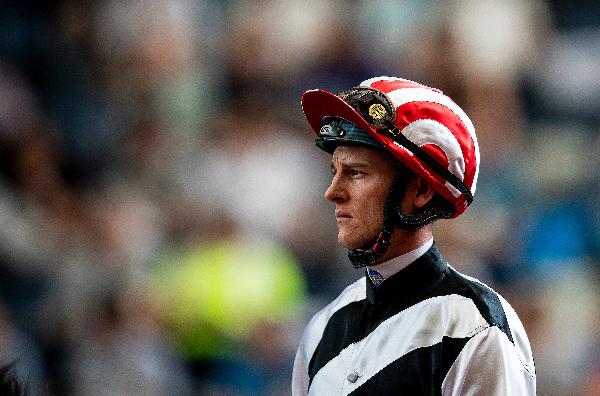 By Declan Schuster
Zac Purton sealed his fourth champion jockey title last season, reigning supreme with 147 wins to end the term as the current dominant force in Hong Kong with 1,170 career wins. But with a new campaign starting on Sunday, 6 September, the champion jockey is predicting that this season’s battle to retain his crown will be the toughest yet.

“I think it’s going to be harder this season because John Moore was a good supporter of mine these past few seasons and he’s now departed,” Purton said. “Although David Hayes has come in, it appears as though he’s going to spread his rides around and it looks like his younger horses won’t be ready until later this year and early next year.”

A new season always brings new challenges and challengers but Purton expects his main rival at the top will once again be Joao Moreira who has a firm association with John Size, an 11-time champion trainer in Hong Kong.

“John Size had a quiet season last season and looked like he started to put a few of his good horses away to really focus on this season, I just think because of those things it swings the pendulum into Joao’s (Moreira) favour and it’s going to be harder for me. But, you know, it is what it is, I’ll just keep turning up and hopefully I can get some support,” Purton said.

Purton’s latest championship gave him a third title on the bounce but before the Australian’s dominant run it was Moreira who, with a then season-high 145 wins (2014/15), unseated him as champion after just one season at the top. The Brazilian sensation went on to tally 168 and 170 wins for two more titles (2015/16, 2016/17) and looked to have a firm grip on the champion’s trophy.

But Purton has bounced back strongly since then and after hitting the front in the title race in March of last season, the 37-year-old never looked back. He charged home with a win total of 147 to Moreira’s 138 to beat his rival to a fourth crown.&nbsp;

“I haven’t had much to do with him previously so he’s new to me, but his trial was fine: he showed a little bit of speed, which I was surprised with, but he did manage to travel up really comfortably behind them coming into the straight; when I peeled him out he did put the brakes on and stop a bit, so he’s a bit of a tricky horse,” Purton said.

The I Am Invincible gelding steps out for the first time under the care of new trainer Dennis Yip, after switching from the Richard Gibson yard during the off-season.

“I think he sort of needs to be smothered or race inside of them for as long as he can and he’s got to carry top-weight, which is never easy in these sorts of races, so he’s up against it a little bit, but he’s well within himself – he’s capable for sure,” Purton said.

The seven-year-old will carry 133lb and boasts two Class 1 wins to his name; he has also competed at G1 level a total of five times, his best finish being fourth to Beat The Clock in the 2020 G1 Centenary Sprint Cup (1200m).

The weekend card will also see Purton partner the Danny Shum-trained Angel Of My Eyes in the Class 4 Ma On Shan Handicap (1400m).

“He continues to improve all of the time, which is a good sign, his action gets better, he looks better, he seems to work better so we’re happy with him,” Purton said.

The four-year-old scored a fast-closing win at his second start at the back end of last term.

“He’s a horse who did well last season, he was lucky to win his race over 1200 (metres), I say that just because they did go so fast.”

“It’s not really the proper distance for him, he does feel like he’s going to be a miler and further, so the step up in distance is good for him,” Purton said.

Moreira takes full book to usher in the new season

Brazilian ace Moreira was buzzing to get into the new racing season this morning at Sha Tin as he readies for Sunday’s season-opening fixture as the only jockey on the 20-rider roster with a full book of 10 rides.

“I’m doing what I really love, I love being involved in horse racing, I love winning races, I’m very fortunate to have the great support of some nice people and some nice horses are getting me excited for work – I can’t wait until we get going!” Moreira said.

Moreira fell short of a fourth Hong Kong champion jockey title last season but closed out what was still a brilliant last season with 138 wins to finish second in the jockeys’ standings; and he bagged five Group 1 scores, including two at December’s 2019 LONGINES Hong Kong International Races.

“I just hope that I can be on the right horses and really get the best out of them; it’s day by day, it’s going to be a long season because we pretty much did not have a proper break as we are all going through a hard time,” Moreira said.

The five-year-old gelding returns from a Four-Year-Old Classic Series campaign which twice saw him place behind last season’s standout, Golden Sixty, before finishing 11th in the 2020 BMW Hong Kong Derby when stretching out to 2000m.

&nbsp;“The 1200 metres is probably a bit too short for him I would say, he’s not going to be a sprinter, if he does go and win the race it will be a surprise to me but maybe because he’s very fresh the shorter distance may not affect him,” Moreira said.

The Hinchinbrook gelding won the first five races of his career, before adding a sixth win at his seventh start in the 2019 G3 Lion Rock Trophy Handicap (1600m).

“I’m quite convinced that he can run a very good race and he’s a horse that I am looking forward to, especially in the next couple of races coming up,” Moreira said.

The Brazilian is wary of the competition in Sunday’s HK$3 million dash, which includes the likes of Wishful Thinker (133lb), Rattan (132lb), Jolly Banner (126lb), Beauty Legacy (119lb) and Computer Patch (117lb) among the 11 entrants.

“It’s going to be a very strong race, a fast-run race, as there are a few specialists over the sprint distance in there.”

“I’m just hoping that he does his best, we learn a little from it and he gets a little bit fitter,” Moreira said.

Moreira and Size proved a solid partnership again last season: the pair teamed up for 31 wins together and continue their association this weekend with six pairings, including the promising youngster Excellent Proposal in the Class 3 Sunset Peak Handicap (1400m).

“No doubt he’s going better than before, he has shown a bit more maturity and his trial the other week was eye-catching, so he’s definitely going to the races with a little bit more experience than what he has had in the past,” Moreira said.

The 78-rater narrowly missed on debut, finishing second, beaten only a short-head to Falcon Turbo in the Class 3 Guangdong-Hong Kong Cup Handicap (1200m).

The gelding was a three-time winner pre-import, scoring at Kembla Grange, Randwick and Rosehill Gardens Racecourses in Australia under the care of Richard &amp; Michael Freedman.

Earlier on the card, Moreira is set to partner the Francis Lui-trained Chancheng Prince in the Class 3 Lantau Peak Handicap (1000m). The colt is stepping out in open company for the first time after winning two out of five races last season against Griffins.

“I think he deserves the opportunity to go up and he deserves respect. He’s been a very straightforward Griffin, he’s done nothing wrong and if he goes there and wins it’s not going to be a surprise to me as he has been so professional,” Moreira said.

The flashy grey will break from gate three against a field of 14 down the straight.