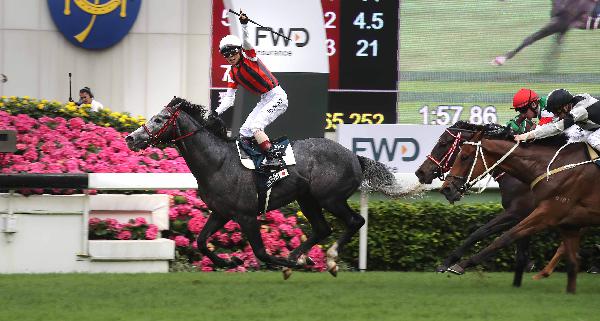 Elite Japanese raiders, high-class challengers from Australia and Europe, and Hong Kong’s brilliant best are among the list of 85 horses holding 102 nominations for FWD Champions Day at Sha Tin on Sunday, 26 April, 2020.

Win Bright has the chance to follow up his sensational FWD QEII Cup win of last year, and could face the superstar mare Almond Eye and Hong Kong’s champion stayer Exultant, as well as Godolphin stars Barney Roy and Ghaiyyath; Beauty Generation is entered to attempt an unprecedented third win in a row in the FWD Champions Mile against crack milers Admire Mars and Indy Champ; and the rising stars of the world sprint scene, Aethero and Hot King Prawn, could lock horns in the Chairman’s Sprint Prize against talented overseas rivals.

“Hong Kong racing has been able to continue with stringent safeguards in place and we are pleased that horsemen from around the world have shown faith and trust enough in our dedication to health, safety and security to nominate their stable stars to our three Group 1 races at Sha Tin on FWD Champions Day. That says much for the attraction of Hong Kong racing and all the positive things it stands for in the world of sport.

“There is a range of factors that will affect the extent to which it is feasible for overseas runners to participate in FWD Champions Day and the situation is a rapidly changing one. The Club is continuously monitoring developments including announcements of Hong Kong and other Governments and assessing what is feasible and appropriate.&nbsp;A realistic assessment of the feasibility of international runners participating in the 2020 edition of FWD Champions Day can only be made in the next few weeks.

“We are pleased to have a good number of nominations but more important than the numbers are the quality and we are delighted that the calibre of entries is so high, with six individual classic winners from Japan and two top-class Godolphin horses, as well as Hong Kong’s best and some very talented Australian and European contenders. We look forward to Sunday, 26 April in anticipation of an excellent day of uplifting sport.”

Win Bright charged to victory over Exultant and Japan’s subsequent Horse of the Year Lys Gracieux in last year’s stellar renewal. He could bid to become the second back-to-back winner since the race was opened to international competition in 1995, following compatriot Eishin Preston in 2002 and 2003, having already returned to Sha Tin in December for an excellent win in the G1 LONGINES Hong Kong Cup (2000m).

The grey is one of 51 entries for the 2000m feature, and one of 18 engaged from Japan. The powerful Japanese cohort includes Almond Eye, whose six G1 wins include the Japan Cup (2400m), Dubai Turf (1800m) and a stunning performance in last year’s Tenno Sho Autumn (2000m).

The powerful Godolphin operation has entered G1 stars Barney Roy and Ghaiyyath: the former returned to action at Meydan recently with wins in the G2 Al Rashidiya (1800m) and G1 Jebel Hatta (1800m); the latter smashed his rivals in the G1 Grosser Preis von Baden (2400m) last year and impressed first-up for this year with a recent 2000m G3 win at Meydan.

Hong Kong’s Exultant is a three-time G1 winner and has been in fine form this season but was undone in a shock defeat when second to fellow triple G1 scorer Time Warp in the G1 Citi Hong Kong Gold Cup (2000m) last month.

Beauty Generation dominated the Hong Kong scene last season, which he rounded out with a second consecutive Champions Mile win. His prowess dipped a notch earlier this term but he has still proven his top-class ability, notably when winning the G1 Queen’s Silver Jubilee Cup (1400m) last time.

The two-time Hong Kong Horse of the Year lost his G1 LONGINES Hong Kong Mile crown in December though when Japan’s Admire Mars stormed to victory. Beauty Generation was third that day, behind runner-up Waikuku who gained a first G1 in January’s Stewards’ Cup (1600m) and has emerged as a local challenger to his outright champion status.

Aethero emerged in the early part of this season as a potential sprint superstar and after winning a G2 at the course and distance was a close third in the G1 LONGINES Hong Kong Sprint. He was found to be under the weather in the aftermath of that effort and has been given time to recover health and form for a spring campaign.