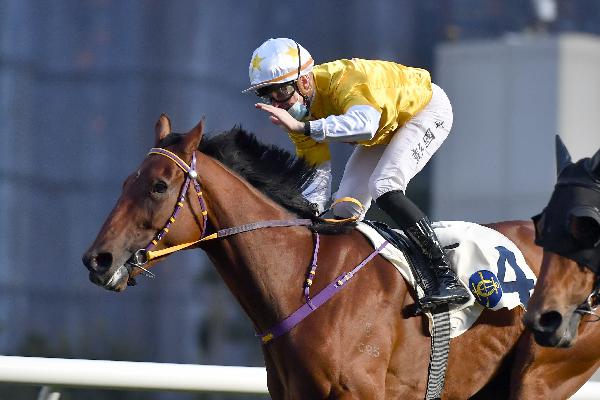 By Leo Schlink
Reprising a latent winning habit, Not Usual Talent’s gate-crashing victory in the Class 2 Choi Hung Handicap (1400m) ended an 11-race losing streak while delivering a reality check to the claims of a string of Four-Year-Old Classic Series aspirants.

Winless since July 2019, the former New Zealander saluted under a perfect ride from Frenchman Tony Piccone to give Benno Yung a double in a timely reminder of the abiding value of tough, experienced horses in Hong Kong.

Pitted against eight four-year-olds from powerful stables with aspirations to the HK$12 million Hong Kong Classic Mile on 24 January – and beyond – Not Usual Talent was produced late by Piccone to upstage Lucky Patch and Enrich Delight.

While there were excuses for some of the emerging blue-bloods left in his wake, with the certainty that many will benefit from the race, Yung’s six-year-old exploded off a building tempo to assert a decisive authority.

“He got a good tempo today and that suited him,” Yung said. “He’s got ability but it depends on the pace – I’m very happy with the win.”

Piccone snapped an exasperating 52-ride run of outs with his first success since Sunday, 6 December.

Like many of his rivals, Caspar Fownes entered the contest with an eye to the Four-Year-Old Classic Series - and was upbeat over Enrich Delight’s performance.

“He’s run really well, he just had that little setback and I was training him up to get to the mile already,” Fownes said.

“I think he’ll come on a lot from this run. It’s all about the big races coming up. I’m happy with that run. I think you’ll see a better horse in two weeks’ time.”

On a defining afternoon, Joao Moreira, Zac Purton and Alexis Badel posted doubles, while Benno Yung and John Size shared training honours with a brace each.

Size’s Sight Success maintained his unbeaten record and vaulted into illustrious company with another eye-catching success in the Class 3 Diamond Hill Handicap (1200m).

Ridden by Moreira, the Australian import started at 1.1 - odds not seen since Hong Kong champion Golden Sixty’s triumph in the G2 Jockey Club Mile at Sha Tin on 22 November.

“It looked a little bit awkward in the run because he’s going joint-leader and he’s got daylight in front of him, it’s just not perfect - it’s not what you want to see,” Size said with signature caution.

“But the horse was good enough to do the job and win the race, you couldn’t ask for anything else.”

“Blake rode him well last start and he rode him well today,” Ferraris said. “I like to show loyalty to people and Blake has done nothing wrong - there’s no point in just taking jockeys off.

Shinn, 33, had endured a run of outs since 2 December but is determined to make the most of limited opportunities and his grit was evident aboard a galloper whose previous 24 Hong Kong starts had yielded just two placings.

“There was a little bit of time between winners but you’ve just got to keep on believing in yourself,” Shinn said after notching his seventh win for the season.

“When an opportunity comes, you’ve got to try and give them the best ride you can.

“This horse did everything I asked from the get-go, he got a nice run and he won well - I’m absolutely delighted.”

“I’ve had a bit of a quiet run so it was nice to get back in the winners’ circle,” Schofield said.

“This horse had been working well leading up to today’s race. We had the right run and the horse did the rest.”