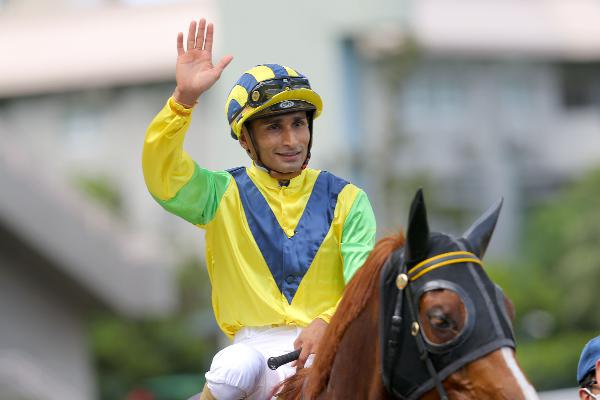 By Declan Schuster
There are seven meetings left in the 2019/20 Hong Kong racing season and while the talk of the town has been the champion jockey race between Zac Purton and Joao Moreira, it’s the man dubbed the ‘Mauritian Magician’ who has stolen the spotlight of late with seven wins from the last two race meetings.

Karis Teetan bagged a four-timer nine days ago at Sha Tin and again starred on Sunday with a treble, equalling his best ever season’s tally of 84 wins in the process. And while he has been producing magic in recent weeks, the jockeys’ title protagonists have played second fiddle with only five wins between them from the last two meetings.

“I wasn’t focussing on breaking my personal best this season, I just try to ride as many winners as I can and things are going well,” Teetan said.

“We have a few more meetings left so hopefully things can keep on rolling and hopefully I can ride as many winners as I can before the end of the season.”

Teetan heads into Wednesday’s (24 June) nine-race programme at Happy Valley with a full book of chances, including three for Tony Cruz. Jockey and trainer have proven a solid partnership this season, striking at 14% together with 22 wins.

“Tony’s (Cruz) played a big role in the last two seasons, he’s definitely supporting me a lot, including all of the other trainers too but I definitely have had a good number of rides from him and a few good winners,” the Mauritian ace said.

The duo has 53 wins together across the last two seasons after their 31 successes together in the 2018/19 season.

“He has definitely helped me a lot to increase my number of wins this season and he was a legend when he was riding, and as well as a trainer; I’ve definitely picked up a few tips from him so it’s a good relationship we have,” Teetan said.

Their association at the midweek fixture kicks off in the Class 3 Mount Gough Handicap (1200m) with California Turbo (117lb), who takes on the impressive Sky Darci (119lb) from the Caspar Fownes yard, again to be ridden by Joao Moreira.

“He (California Turbo) has won at Happy Valley before – he’s been running well and I think he comes to the Valley with a similar rating that he has won off before, so he should be competitive especially from the nice draw,” Teetan said.

The Fastnet Rock gelding will break from gate three in the field of 12 with only 117lb on his back, as he searches for a second win this term.

“I think towards the end of the season if he can get another win it would be good,” Teetan said.

His task though is not made easy, the three-year-old Sky Darci steps out again in search of more riches following his nine-point rating rise for a win last time out. The youngster faces Class 3 for the first time.

“I was quite confident about Sky Darci (last time), I thought he was a nice horse, he was a little bit unlucky the start before, then he actually didn’t let us down, he won in a very nice way,” Moreira said.

“He tracks the speed well and he had such a great acceleration in the home straight so if he’s able to produce that once again he’s going to be a very tough horse to beat.”

Teetan and Cruz also combine in the first of the night’s two Class 2 contests, the Mount Cameron Handicap (1650m), with Sunshine Warrior (116lb) who is searching for his fifth win this term and third from his last five outings.

“His last few runs have been good; I was surprised that he handled Happy Valley so well because he’s such a big horse but it’s a good thing,” observed Teetan, who hops back in the plate for the first time since December.

The Pierro gelding steps into Class 2 for the first time in the hope of continuing his ascent up the ratings. The five-year-old has risen 30 points since his first-up win last September.

“His last run was good, he carried a big weight (133lb) last time and just got brushed off, but I think this time, going up from Class 3, I think he is up to it with the light weight.” Teetan said, “It should give him a chance, especially as he is a big strong horse, so he’ll feel nothing on his back.”

The pair also combine in the night’s other Class 2, the Magazine Gap Handicap (1200m) with Waldorf.

“He’s actually one of my favourite horses in Tony’s (Cruz) stable – I love him, every time he goes to the races he just keeps trying, he’s gone from Class 4 all the way to Class 1,” Teetan said.

The New Zealand-bred five-year-old has five wins to his name, including four with Teetan aboard and resumes from a month break between runs on Wednesday night.

“He’s a little champion, I always know he will give his best and he had a little freshen up now between runs, so that will do him a good thing - I hope he does well again,” Teetan said.

Also in the field is Country Star (129lb), one of two for trainer John Size, with apprentice Alfred Chan aboard who takes seven pounds off following his slashing third-place effort last start.

“I think the fast pace suited him because last start there was lots of speed in the race and Mr Size told me to drop him back and ride for luck, then when he found a gap, he ran home pretty strong,” Chan said.