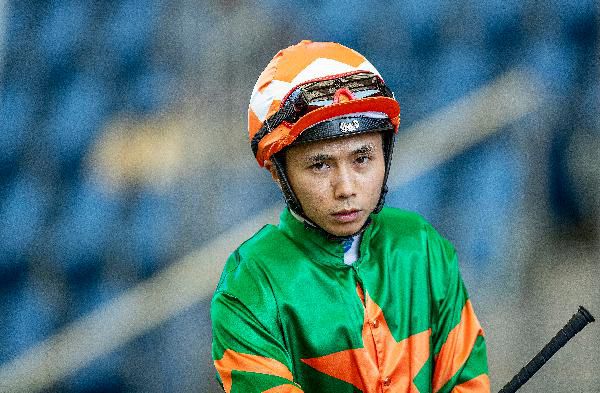 “Lately, the horses have had good draws and a bit of luck, so I’m pretty lucky but I’m happy that I can get on some nice horses too,” Poon said. “I always feel good if I can keep improving or increase my number of winners - that’s what I hope to achieve each season.”

Having already surged past last year’s score of 29 victories, Poon is now charging towards a new high as he sits just one shy of his best ever season’s tally of 35 wins, which he recorded in consecutive campaigns (2017/18 and 2018/19).&nbsp;

“I think the most important thing is my discipline in races, I ride competitively but I’m riding more carefully by trying to make less mistakes and not causing trouble or getting suspended - I am more controlled and more disciplined in races.

“In other words, I would say this season I am more focused, you need more focus to do it,” Poon said.

Among his 34 triumphs this campaign, Poon has a pair of G3 successes having claimed the Centenary Vase Handicap (1800m) aboard Glorious Dragon before prevailing aboard Butterfield in last month’s Queen Mother Memorial Cup Handicap (2400m).

“It’s really hard to get rides in the big races, so I’m very lucky I can get the support and get on a pair of nice horses in Butterfield and Glorious Dragon - Butterfield is young and I think he can continue to improve; Glorious Dragon has the class, I hope he continues to go on with it too,” Poon said.

A formidable ally, trainer Frankie Lor has provided the 27-year-old with eight wins this season and on Wednesday evening (9 June) the duo links with two chances, firstly, Mission Smart in the third section of the Class 4 Port Shelter Handicap (1200m).

The son of Smart Missile tallied a pair of narrow defeats at the city circuit earlier this term before twice finishing midfield at Sha Tin, from four runs in total this campaign.

“I galloped him on the grass, he was quite laidback, he doesn’t have a good draw this time but hopefully he can jump and get a position in the second half of the field or midfield and from there relax and finish off,” Poon said as he prepares to partner the gelding from gate 10 against 11 rivals.

Smart Missile sits third with 35 wins this term behind the season’s leading sire Exceed And Excel who has 38 wins, while Per Incanto holds second with 36 wins.

“I’ve only ridden him once but he came from behind that day, so hopefully he can show a similar pattern tomorrow night with a strong finish,” Poon said.

Teaming with Lor again later in the evening, Poon gets the leg-up on five-time course and distance winner We The South in the feature, the Class 2 Castle Peak Bay Handicap (1000m).

“He can be quite good and finish so close or even win sometimes but then other times he can be very disappointing, I just hope he can jump fast, get a close position and get every chance to finish off the race,” Poon said.

Stepping away from gate eight, the Your Song gelding faces a hot bunch of 11 other speedsters as he looks to enhance his rather impressive record.

Another of Poon’s biggest supporters has been Francis Lui; this season the duo have also combined for eight wins and tomorrow night the rider takes a pair of mounts for the handler, firstly aboard last-start winner Management Supreme in the first section of the Class 4 Port Shelter Handicap (1200m), before linking with Igniting in the Class 3 Kat O Hoi Handicap (1200m).

“He’s (Igniting) a big horse, he’s got some speed and I think he’s quite tough so hopefully he can jump well, show his speed early and tough it out to win again,” Poon said.

The son of Starspangledbanner is a two-time course and distance winner this term, once under Poon exactly three starts ago.

Earlier on the card, Poon pairs with the Tony Millard-trained Fortune Patrol in the Class 5 Yan Chau Tong Handicap (2200m). Poon and Millard have combined twice this season including with Gallant Crown at last week’s fixture at the city circuit.&nbsp;

Luke Ferraris, the son of current Hong Kong-based trainer David Ferraris, will join Hong Kong’s riding ranks for the 2021/22 racing season on a half-season contract from 15 July, 2021 to 13 February, 2022.

“We were over the moon, it’s always what he’s wanted to do and he’s certainly earned it,” David Ferraris said.

At age 19, Ferraris is set to be the second youngest arrival in Hong Kong after New Zealand jockey Michael Walker was licenced for a short-term stint in early 2003 at age 18.

The two-time South African champion apprentice has made waves in his home country and arrives in Hong Kong having already achieved considerable success with a South African Triple Crown triumph to his name aboard Malmoos, as well as victory in the G1 Cape Town Met (2000m) at Kenilworth Racecourse, Cape Town’s biggest race atop Rainbow Bridge.

“He’s done extremely well back in South Africa, the trainers support him and he’s been riding some real big horses at home - I think they’re going to miss him quite dearly.

“He’ll be riding Rainbow Bridge in the Group 1 Durban July Handicap in the first week of July and then head straight into quarantine, for what will be quite a long quarantine,” David Ferraris said.

Looking ahead to tomorrow night’s fixture at the Valley, David Ferraris will put the saddle on last-start winner Nitro Express in the Class 4 Silver Mine Bay Handicap (1650m).

“He’s got gate nine tomorrow night which isn’t going to make things easy but the horse is in top form,” Ferraris said. “He’s absolutely flying for an old boy, he’s earned good money for the owners and he’s really doing very well at this later stage of his career.”

The Australian-bred nine-year-old made all under Joao Moreira last start in Class 5 but this time steps up in grade and will be paired with jockey Matthew Poon from gate nine.&nbsp;

“He was just given an exceptionally good ride, normally he would never go to the front like that but Joao (Moreira) just decided that was the best thing to do and it worked out very well,” Ferraris said.

Wednesday’s nine-race fixture kicks off at Happy Valley kicks off at 6.45pm with the Class 5 Yan Chau Tong Handicap (2200m).