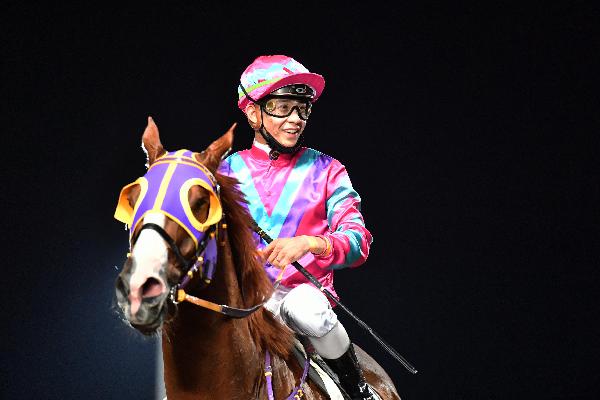 The six-year-old rises to 2400m for the second time after finishing a close-up third to Butterfield in the G3 Queen Mother Memorial Cup Handicap last season, however this time he does so for his first try at G1 level against a tidy group of overseas raiders.

“I think he’s a stayer and when he relaxes in the race I think he can get further - it depends on the pace in the race but if it’s suitable he should still run well,” Leung said of the seven-time winning son of Reliable Man.

Dictating a slow tempo to upstage his better credentialed rivals, Leung and Reliable Team staved off six others to record a make-all victory in the HK$4.75 million G2 BOCHK Jockey Club Cup (2000m) on 21 November at odds of 16/1.

“We were lucky, we controlled the pace and that’s how we won, I don’t mind if we’re able to do it again on the big day but it depends on the draw and the pace,” Leung said.

On Sunday week, Leung is also preparing to partner More Than This in the G1 LONGINES Hong Kong Mile (1600m) for trainer Danny Shum.

“He’ll be better second-up, he ran ok first-up but the pace was against him, it was too slow and that’s why he didn’t perform but hopefully on the big day the pace is on which will be much better for him,” Leung described.

Upon resumption in the G2 BOCHK Private Wealth Jockey Club Mile (1600m), More Than This finished a fair fourth behind Golden Sixty - a horse he pushed to finish within a head of in April’s G1 FWD Champions Mile (1600m).

Looking towards Wednesday’s (1 December) nine-race fixture at Happy Valley, Leung is readying for four rides as he looks to enhance his haul of 11 wins this term.

The 33-year-old takes the mount on Showina in the first section of the Class 4 Albatross Handicap (1200m) for trainer Chris So.

“He’s been better and better, he has a breathing problem and he has bled before, so that’s why we didn’t want to rush him in the beginning and last time we had an outside draw, so we didn’t rush him by riding him at the rear and he finished very strong.

“This time from a better barrier - I still haven’t discussed it with Chris - but we don’t want to rush him too much, so if he can use his natural speed to go to the front that would be good, if not we’ll run home and let him finish strong,” Leung said.

The four-year-old by Showcasing is a one-time winner in Hong Kong from six starts.

“You can see last start he was able to carry top weight and he still ran home strong so I don’t think the big weight works against him too much, it just depends on where he slots in,” Leung said of the New Zealand-bred who steps away from gate six with 133lb assigned.

Saddling nearly half the field in the opener tomorrow night, trainer Paul O’Sullivan is hopeful of a positive outcome in the Class 4 Frigatebird Handicap (2200m), the fixture’s opening race.

“I have three in it but there’s still no guarantee of winning it,” O’Sullivan said.

“He’s (Victorious Seeker) racing in his best form and I think he saves his best for Happy Valley, he’s handicapped up to his peak, he hasn’t won off this mark before but he is racing well,” the 61-year-old said.

“He’s extremely one-paced and when you’re one-paced there’s only one option - the 2200 (metres) is your only option,” he added. A last-start winner, the six-year-old steps away from gate five with Derek Leung engaged.

The feature race tomorrow evening is the Class 4 Hong Kong Golf Club Centenary Cup Handicap (1200m) with 12 runners going to post, including A Smile Like Yours (132lb), Prance Dragon (130lb) and Wins All (125lb).

Wins All returns first-up for Chris So with Zac Purton engaged. Last season, the Testa Rossa gelding won at his resumption by two lengths over 1000m at the city circuit.

By Declan Schuster
Master Eight has been one of this season’s most impressive performers with swift progression from Class 3 into a leading protagonist for Sunday week’s (23 January) HK$12 million G1 Centenary Sprint Cup (1200m) — a seemingly daunting task for the four-year-old but one that trainer Frankie Lor is quietly relishing.

By Leo Schlink
Determined to build on a positive return to race-riding, Zac Purton believes the pecking order for the HK$48 million Four-Year-Old Classic Series will become clearer during a defining finale to the meeting at Sha Tin on Sunday (16 January).

Purton returns from injury to post 50th for the season, doubles for Leung, Yiu and Lui

By Leo Schlink
Exactly a month after suffering multiple injuries in a Sha Tin fall, Zac Purton notched his 50th victory of the 2021/22 season as the champion hoop revived hopes of a fifth jockeys’ crown with a successful return at Happy Valley on Wednesday night (12 January).