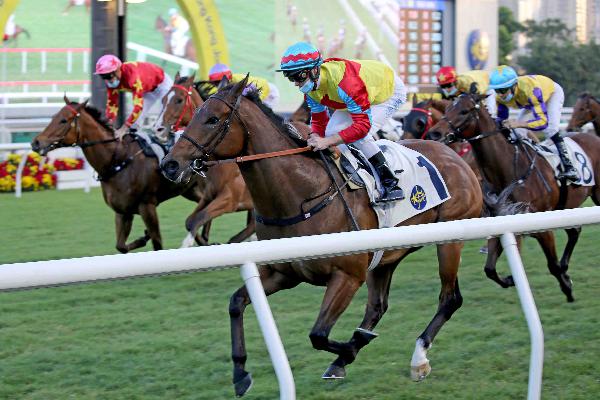 Posting his fourth win from five starts, Wellington vindicated Gibson’s faith by powering to victory in 56.51s under Zac Purton as the gelding returned from an eight-month lay-off.

But it was the behind-the-scenes contribution of Kwok – known as ‘KK’ – Gibson repeatedly highlighted on a day when Moreira stretched his lead in the jockeys’ premiership to 19 over Purton.

“I’ve got many people to thank but the number one person to thank is the mafoo, ‘KK’,” Gibson said.

“She stayed with him for so many days and I want to dedicate this to her because we don’t talk about the grooms enough.

“She’s always been my best groom since I’ve been in Hong Kong. She’s always looked after my best horses and this horse has had quite a lot of issues and she’s spent so much time with the horse.

“Of course, we have a team behind to thanks – the vets and everything – but the person who did so much extra care is KK, so I thank her very much.

“He’s been a really frustrating horse. We’ve had such a good horse in our care, we knew we had to take our time. It’s good to see him win.”

Gibson said Wellington was unlikely to target the Four-Year-Old Classic Series in preference for sprint contests.

Sight Success made a striking impression on debut for John Size as the son of Magnus sat wide with cover before posting an emphatic win in the Class 4 Pak Tam Chung Handicap (1200m).

“He’s done the job he’s supposed to do. He looks he could win a few more races,” Size said of the Privately Purchased Griffin obtained from the 2018 Magic Millions Perth Yearling Sale.

“First starter, drawn the outside, is always a concern but he’s had a ton of practice. He’s obviously immature and inexperienced, so we’ll see how he develops.”

While Purton fired back with a double aboard Clear Choice and Wellington, Jerry Chau was also among those to disturb Moreira’s reign, continuing a fruitful association with Paul O’Sullivan’s Casimiro, winner of the Class 4 Tai Long Au Handicap (1600m).

Since taking over on the six-year-old, Chau has used his seven-pound claim to telling effect, winning twice from three attempts on the chestnut.

The success was Chau’s 23rd for the term.

“I think the step-up to the mile has been very good for him (Casimiro) and it was a very good ride,” O’Sullivan said.

“That was a very strong race, one of the best Class 4s all season. He’s done his job. He certainly looks a three-length better horse over 1600m than 1400m.”

In a triumph for perseverance and resilience, Alex Lai posted his first win of the season on Moon Peaks in the Class 5 Wong Shek Handicap (1200m) for Me Tsui.

“Last year was a hard time for me, this year has also been hard,” Lai said.

“I have to maintain a good attitude and try my best - it is very difficult.”

&nbsp;“You just have to keep working hard and hope for good rides.”

“He’s an eight year old and we’ve discussed it many times about how long he’s going to keep going for because he’s been such a good horse to the owners, they don’t want to over-tax him,” Hall said.

“Every time we threaten to do something like that (contemplate retirement), he keeps running well and this season, once again I refer to his first-up run, and he was at the peak of his powers. He’s in the best form of his career.

“It was a little bit of a gamble. I put him in as a late entry. I thought ‘Small field and light weight.’ The best time to try a horse at 2000m is under those circumstances and he’s got the miles in his legs and he’s super fit.

“So we put him in, Poon was available who knows him really well and, bingo, we got a merry Christmas.”

The win was Flying Quest’s seventh in Hong Kong, but his first at Sha Tin.

Frankie Lor will consider his options – more likely at home than abroad – with Glorious Artist, winner of the Class 2 Chek Keng Handicap (1650m).

Given a beautiful ride by Derek Leung, the son of Zoffany registered his fifth victory on the All-Weather surface.

“Overseas - we don’t know yet,” Lor said of a potential campaign abroad. “The next time we see him might be on 17 January in the Class 1 over 1650m on the dirt at Sha Tin.

“We don’t know if we can go to Dubai or not - we’re still waiting.”