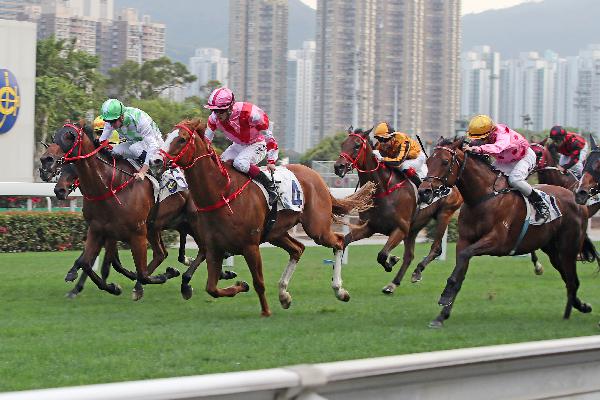 Leung left little to chance on the Frankie Lor-trained chestnut, a lesson learned from a luckless defeat the time before at Happy Valley. On that occasion, the rider found himself trapped fence-side and then pocketed behind a wall of horses; this time, he settled his mount in a stalking spot, with naught but air to his outer, perfect for a centre-track rattle to the winning post.

“Last time he ran very well, he was very honest but we got held up and he missed the kick — even at the winning-post we didn’t have room. That gave me confidence for today,” Leung said.

“We sat two-off the rail this time because I wanted to make sure he had a clear run and when I asked him to let down, he gave me what we needed.”

Simply Brilliant’s (121lb) unchecked run was enough to edge the Blake Shinn-ridden Harmony Victory (122lb) by a head, with Encouraging (113lb) and Fat Turtle (120lb) the next two across the line in a blanket finish. The winning time was 1m 33.67s.

Lor was delighted to see his stalwart galloper earn a first win since he took the 2019 edition of the G3 January Cup Handicap (1800m); and the handler revealed that he had no hesitation in sticking with Leung.

Lor is now looking at the G2 Chairman’s Trophy (1600m) as a possible port of call for the Frankel gelding, whose performances in the past year include a fine third to Beauty Generation in the G1 Champions Mile (1600m).

“You can see his ability in his form,” Leung said. “He’s chased Beauty Generation in big races so he’s always had the quality, he’s just older and with this weight in this grade it was ideal for him.”

The three-timer was Leung’s first such haul since the glorious afternoon of 1 October 2017 when he guided Beauty Generation to a front-running win in the G3 Celebration Cup Handicap (1400m), a success that set the ball rolling on the subsequent champion’s epic rise.

And on the eve of BMW Hong Kong Derby week, with those days of Beauty Generation and a G1 win in the LONGINES Hong Kong Mile two years and more distant, Leung delivered a timely reminder of his talents.

“I always try my best and challenge myself,” Leung said. “This week, all the pressure for the Derby is on Vincent Ho with Golden Sixty and we don't have any pressure.”

The rider, 31, is set to partner Lor’s Reliable Team in the ‘blue riband’ in eight days’ time, an outsider against his fellow Apprentice Jockeys’ School Graduate’s &nbsp;star mount, with Ho and Golden Sixty bidding to complete a perfect three-from-three in the Four-Year-Old Classic Series.&nbsp;

“My horse is a front-runner, so I’ll try to help him finish strongly. I’ll let him move forward and see what happens against Golden Sixty,” Leung said.

The two-time Tony Cruz Award winner (2017, 2018) — as the circuit’s leading ‘homegrown’ jockey — was in a determined groove throughout the afternoon.

He ensured Joao Moreira was on the losing side of a duel in the Class 4 Tseuk Luk Handicap (1800m, dirt) as his strength kept Gala Night a neck to the good over the Brazilian’s mount, Foodie Princess. Leung was up top when Gala Knight prevailed at Happy Valley 10 days ago and today’s front-running success gave him a 23rd win from 326 rides for the John Moore stable, going back to November 2008.

“He’s a good stayer — he’d been giving me a good feeling in the morning. He won well last time and is only three years old,” the rider said.

“On the all-weather track, if you find the front you have an advantage, so once he got there he wasn’t going to stop — I just had to ask him a bit earlier because he hasn't got the acceleration, but at the 400 (metres) he was at full steam already and he stayed on.”

Leung’s judgement and strength were again evident in the next, section one of the Class 3 Sheung Hei Handicap (1400m). The rider once more set the tempo, this time on the Danny Shum-trained Smoothies (122lb), and was powerful in the drive to hold off Ho on High Rise Soldier (119lb) by a short-head.

Champion jockey Zac Purton sealed a four-timer and in doing so closed the gap on premiership leader Joao Moreira to four wins.

“It’s just a matter of turning up every meeting, trying to ride winners and if we can make a race of it, we will,” Purton said.

He capped his afternoon’s tally with a comfortable win on the smart four-year-old Mighty Giant in the Class 3 Sheung Hei Handicap (1400m). The Ricky Yiu-trained chestnut took his record to three wins from six runs.

“He’s not a sit and sprint horse, he’s very big and he’s got a lovely long action, so I just got him into a rhythm and kept him happy. Last time I rode him, they went really fast and he kept galloping, so it’s not about trying to outsprint them, it’s about having him happy,” Purton said.

“He’s still quite raw, he’s very big and he’s still working out where to put his legs but he’s honest — he’s going to be unassuming, I think, he’s going to improve as time goes on.”

The Australian had made it three wins with a punching drive on the Tony Cruz-trained four-year-old Transcendent, in the same black and grey colours as champion stayer Exultant.

The French import was a Listed winner pre-arrival, when known as Pizzicato, and made a belated Hong Kong debut, having been withdrawn from an intended outing back in December.

“He had some complications, he had a little accident on the float to Happy Valley; everything was going great after he recovered from that and then he had a foot problem and that was two months we’d lost,” Cruz said.

“He’s only a miler — he wouldn’t have run the Derby distance — but you can see his form in France, he’s a very consistent, honest horse. He had to win today and Zac rode a perfect race.”

Purton posted back-to-back wins early on the card, thanks to a pair of three-year-old prospects: in the afternoon’s second contest, the Class 4 Shung Ling Handicap (1200m), the David Hall-trained Beluga scored at his second start; one race later, Purton guided the Dennis Yip-trained Good View Clarico to a straight dash win in the Class 4 Fung Mo Handicap (1000m).&nbsp;

The John Size-trained Juneau Park (130lb) got the best of a frantic duel to win the Class 4 Sze Mei Handicap (1400m) and ensured Moreira took something from the day. The 1.5 favourite was second-best everywhere except where it mattered; the Brazilian ace elicited a last-gasp lunge, drove the four-year-old’s long nose down, and when the camera flashed the verdict was his over the Shinn-ridden Ka Ying Excellent (127lb).

Shinn had two close seconds to show for his efforts, taking his season’s tally of runner-up finishes to 35, against a solid nine wins.

Apprentice Victor Wong made it three wins in as many meetings when he took the opener, the Class 5 Ng Fong Handicap (1200m), aboard the Peter Ho-trained Multimax.