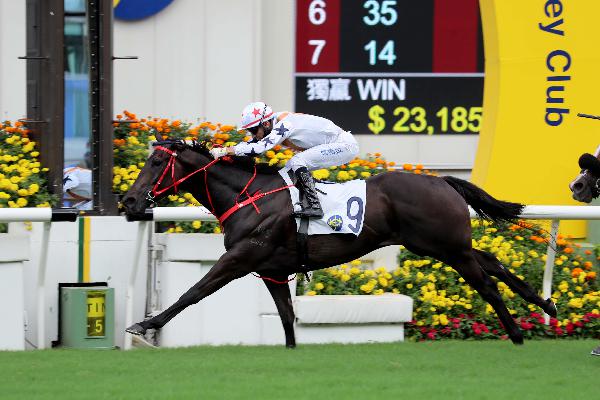 Courier Wonder struggled for clear running in the straight when a three and a quarter length fifth to Lucky Patch when resuming in the G2 Premier Bowl Handicap (1200m) at Sha Tin on 17 October.

Unbeaten in five starts last season to secure acclaim as Hong Kong’s Most Improved Horse, while rising from 52 in the handicap to 107, Courier Wonder would certainly have figured in the finish last start with an unimpeded passage.

The son of Sacred Falls showed good form when winning a subsequent 1200m trial at Sha Tin, dictating from the front to clock 1m 10.27s with a 23.2s split for the final 400m in preparation for this weekend’s assignment against G1 winners Wellington and Hot King Prawn.

To be again partnered by Joao Moreira, Courier Wonder won’t necessarily lead on Sunday, according to Size.

“He’ll probably be in the first three. I’m not sure if he’ll lead — one of the other horses might have the speed to lead him but I’m pretty sure he’ll be running in the first three or four,” the 11-time champion trainer predicted.

“He seems okay. He didn’t take any backward steps after that (first-up) race. He’s indicated in his trials that he’s improved a little bit since his run. I expect him to run a better race.”

“It was an interesting race where there was a lot of horses that sort of finished in a bunch and probably it wasn’t a race where you get a good guide for the future from,” Size said.

“But, as far as the health of the horse and the way he’s trained since then and his trials and everything like that, he’s been good. He doesn’t seem to have anything that would be inhibiting his performance and I think he’ll run another good race.”

Pitted against Golden Sixty, Waikuku is poised to “run one of his better races”, according to Size.

“I think he’s going to probably improve again with this start because he’s had a long break and he’s started work in April but I expect him to take the next step. All being well, he’ll probably run an improved race on International Day.”

With the BOCHK Jockey Club Cup completing a trio of G2 contests, there will also be plenty of interest on the undercard, notably the clash between unbeaten Master Eight and Nervous Witness in the Class 2 BOC Life Handicap (1000m) on Sunday.

Hayes has been unable to find any reason for Nervous Witness’ failure when third behind Cordyceps Six as a 1.1 favourite over the same course and distance on 7 November.

“It wasn’t pleasant but we couldn’t find anything wrong with him. We’ve gone over him with from head to toe — and so have all the vets — and everything is normal, so we’ve just put it down to a bad day and hopefully he can bounce back on the weekend.

“So, he’s got a clean bill of health and I’m just going to forget about the last run and move forward.

“I let him stretch his legs on Wednesday (17 November), just to check his legs at galloping tempo and he wanted to go faster and he did it really, really well. He’s a fit horse, he’s on his fourth run now, so he doesn’t need to do a lot on the track.”

Hayes is respectful of Frankie Lor’s Master Eight, who is yet to taste defeat after three starts.

“I think (experience down the straight) has got to be an advantage rather than a disadvantage, but good horses can cope with a lot of things and obviously Master Eight is very good,” Hayes said.

“It will be nice to have Nervous Witness in a race where he’s not favourite — I think Master Eight will probably be favourite on the day.

“He’s a very fast horse, my horse, and he’ll cruise up on the pace but from the barrier, we don’t have to be as frantic and we’ll probably end up on the outside rail and Joao Moreira (on Master Eight) will probably be coming across to us.

“There’s another fast horse (Flying Bonus) in it as well, so they might sit behind the obvious leader.

“He’s in really good shape and I haven’t lost faith in him because he’s just had one bad day.”

Lor, who leads the trainers’ championship with 18 wins, will unveil another newcomer when En Pointe contests the Class 4 BOCHK Cross-Border Services Handicap (1200m) for Zac Purton.

“He’s a really good horse. When he came to Hong Kong, he was nearly 1300 pounds so we had to do a lot of things with him and make him lose the weight,” Lor said of the Hallowed Crown gelding.

“Every trial, he keeps improving. The last trial, he trialled really good and I talked to Zac and we decided to run on Sunday.”