Size’s Champion’s can still get his Way 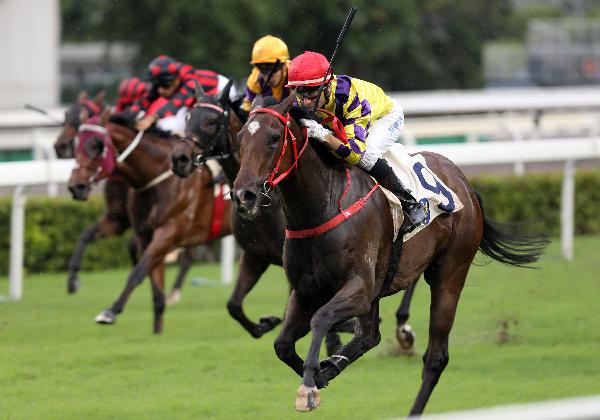 John Size knows what it takes to win the BMW Hong Kong Derby (2000m) and this Sunday (22 March) Champion’s Way is looking to become the Australian’s fourth winner of the HK$20 million feature.

The Hinchinbrook gelding is aiming to join Fay Fay (2012), Luger (2015) and Ping Hai Star (2018) as victors trained by Size and after drawing gate eight at this morning’s (19 March) barrier draw at Sha Tin, the 11-time champion trainer was satisfied.

“I think the draw is ok for him and his racing style – to go forward a little – and I think there are four or five horses in there that’ll show decent speed, so hopefully he’ll be able to position himself midfield,” Size said.

Immediately outside of him in gate nine is the top-rated Golden Sixty, who is looking to become the second horse to sweep the Four-Year-Old Classic Series since Rapper Dragon (2017) following his wins in the Hong Kong Classic Mile (1600m) and Hong Kong Classic Cup (1800m).

Champion’s Way held onto second last start behind Golden Sixty over 1800m. The four-year-old hit the front at the 250m mark, only to be worn down by the winner, but now both gallopers face the unknown prospect of seeing out 2000m.

“I think he was run down by a better horse on the day. I mean, obviously the 1800 metres looked to be as far as he wants to go but Golden Sixty being a champion at present has the ability to sprint quickly and put them away fast – I think he showed his authority to win that day,” Size said.

Champion’s Way began his career last season on a rating of 52 as an unraced PPG (Privately Purchased Griffin). He won his first five races before tasting defeat and closed out last term with a G3 score in the Lion Rock Trophy Handicap (1600m).

“There’s a query him running the 2000 (metres) but he has got a nice rolling action and even though he’s a Hinchinbrook, he’s probably going to race well and acquit himself well and if he has a bit of luck he just might get the trip,” Size said.

“It’s always nice to think that’s going to happen and he hasn’t been stressed much since he acquired that high figure.”

This term though, the gelding is yet to win, and now races off a career-high mark of 108, the second-highest in the race behind Golden Sixty, who ranks at 112.

“I think he’s coming along nicely - his two runs against the four-year-old’s have been adequate and I think he’s right in this race,” Size said.

As for Francis Lui’s duo, Golden Sixty has gate nine and More Than This stall one, the latter pairs with three-time champion jockey Zac Purton. The Australian was pleased with drawing the inner rail-side position against the field of 14.

“I’m very happy with that. In the first two legs of the Four-Year-Old Classic Series he’s broken from the widest gate and although they’ve been small fields he’s had to go back but from this good draw, hopefully we can be a little bit closer and not have so much work to do,” Purton said.

Purton will be looking to secure his second Hong Kong Derby following his win aboard Luger in 2015, while a win on Sunday for Lui will be his first in the historic feature.

“It doesn’t look like there is going to be too much pace in the race – so I thought barriers were going to be important and now we’re halfway there, so we just need a little bit of luck now,” Lui said.

The Caspar Fownes-trained Columbus County will break from gate three, while Brazilian G1 winner Butterfield was drawn in gate 12.