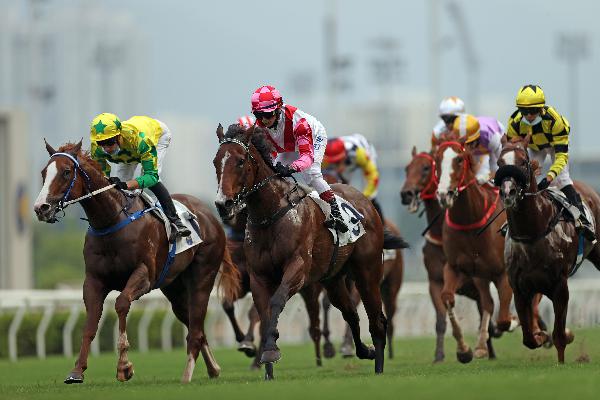 By Declan Schuster
Caspar Fownes has always had high hopes of Sky Field and in Sunday week’s (12 December) G1 LONGINES Hong Kong Sprint (1200m) the handler is banking on consistency and a bit of luck as the classy chestnut targets a first scalp at the top-level.

“I’m sure he’ll give us a big run, he was a bit unlucky last start - it was a bit tight for a gap there and he was impeded but he still showed a pretty good kick over the last 100 (metres). I think once we get to the ‘A’ Course with him that he’s definitely going to be a first-three chance on the big day,” Fownes said at trackwork this morning.

Stepping out for a barrier trial this morning (30 November) on the dirt at Sha Tin, the Deep Field gelding looked in fine fettle under Blake Shinn, pulling fiercely to clock a hard-held 1m 10.76s behind War Weapon and Gallant Crown, respectively.

“It backfired a bit, I put the cups (blinkers) on him in the hope that he would come out and switch off but he wanted to do his own thing, although it doesn’t matter, he’s a very fit horse and he’s a very consistent horse,” Fownes said of the five-year-old.

“No blinkers in the big race, he won’t have the blinkers on - he’s a fit horse and he’ll be running well,” Fownes said.

The chestnut was crowded for room at crucial stages on the inside but still managed to clock the second-fastest last 400m (22.12s) behind only Naboo Attack (21.83s) in the Jockey Club Sprint.

A regular presence at Conghua, Sky Field will remain at Sha Tin with Fownes until the race.

“He’s in good form, obviously he’s up in class now but he showed us last season that he’s competitive in Class 3, so he could probably snag a place, it’ll be tough to be winning again I would say though,” Fownes said.

The six-year-old Hong Kong International Sale graduate is a four-time winner in Hong Kong - twice this season over 1800m at Happy Valley in Class 4.

“He’s always been consistent and he’s a big, strong horse, even though he’s drawn out in the carpark I think the 1800 (metres) will give him the chance to get a position throughout,” the handler said.

The Savabeel gelding’s last two runs came within four days of each other, saluting on the quick back-up by a half-length when making all.