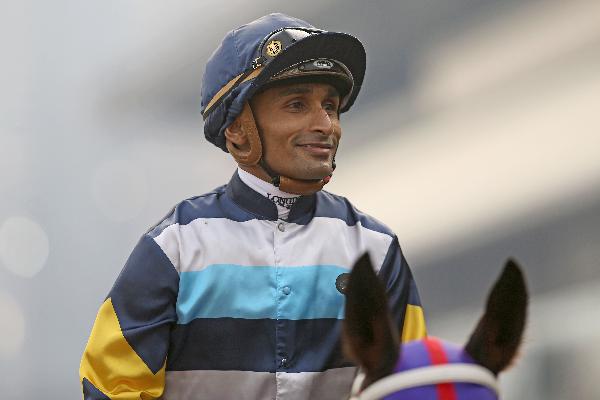 By Declan Schuster
Karis Teetan surged past his best ever season’s tally of 84 wins late last month and the man dubbed the ‘Mauritian Magician’ is showing no signs of slowing with a full book of 11 rides this Sunday (5 July) at Sha Tin, including the exciting youngster Armando in the Class 2 Yan Chau Tong Handicap (1200m).

The 30-year-old excelled through June with 11 wins, stealing the spotlight from the champion jockey protagonists Zac Purton and Joao Moreira, and he kicked off July with yet another treble, making it 19 wins from his last 10 race meetings. That takes his seasonal tally to 88 with four meetings left in the 2019/20 Hong Kong racing season.

“It’s gone very well - it’s toward the end of the season and I’m pretty happy with the way things are going, there’s a few more meetings to go and I’m still fully focussed,” Teetan said.

“If things can go into next season like it is at the moment, with the support I’m getting, I’d be pretty happy with that.”

Teetan pairs with talented three-year-old Armando (119lb) in the day’s finale after the duo caught the eye on debut over 1200m, closing strongly to finish fourth behind Mr Croissant (128lb), who he faces once again.

“It was a good run - I thought he finished off the race pretty strongly so we’re looking forward to him coming back again,” Teetan said.

The What A Winter colt was undefeated in three outings pre-import, closing out his South African career with a G3 success in the Cape Of Good Hope Nursery (1200m) at Kenilworth, before arriving in Hong Kong to be trained by Tony Millard.

“He’s a nice type, he’s progressive he just needs a little bit of luck but it’s a very tough race and we didn’t get all the favours because we got the worst draw,” Millard said.

The South African-bred colt has since crossed the line second in a recent barrier trial on the Sha Tin dirt over 1050m with Teetan in the plate. This Sunday the pair will break from gate 10 of 12.

“He trialled good, he needed a trial - it was a nice work out for him to get him ready to go to the races and we think now he is on the right road,” Teetan said.

Millard though, directed respect toward Lucky Express, one of a trio of three-year-olds in Sunday’s contest. The other is the Tony Cruz-trained All In Mind (120lb). The John Size-trained Lucky Express (120lb) finished ahead of Armando in third last time.

“Armando’s a pretty straightforward horse but as I say it’s going to be very difficult to turn the tables on John Size’s horse - he was a little bit unlucky there and we don’t have a good draw at all,” Millard said.

Three-time champion jockey Joao Moreira is again booked for Lucky Express. The gelding was previously known as Prince Of Sussex pre-import in Australia and was a winner of two out of his three runs, earning AU$681,250 (approx. HK$3.8 million) in the process thanks to a lucrative score in the AU$1 million VOBIS Showdown (1200m) at Caulfield.

“He just needed that first run last time and after that we’re going to the race with a bit more confidence,” Moreira said. “He is a very reliable type of horse and he did indicate to me in his trial that he has improved a bit and he doesn’t have to improve too much to be competitive in this class.”

Moreira took home a double on Wednesday at Sha Tin to reduce Purton’s gap at the top to five in the championship race – the latter took home one win thanks to Columbus County’s gutsy feature race success.

“Fortunately, we went home with two wins in the bag - I’m sure everybody who is watching is happy to have seen what they have been seeing, I’ll just be doing my best till the end of the season,” Moreira said.

Mr Croissant defeated the pair of youngsters last start and reopposes off a 6lb higher mark. The Chris So-trained galloper will be ridden by Chad Schofield again and the duo will set off from gate two.

“It was a good win; he obviously came into that race fresh; he had a lovely run from a good gate and in a strong race he got a tight gap. He burst clear and he won well - it was full of merit,” Schofield said.

“He’s had a lovely, quiet trial between then and now and again he’s going to go to the races in good condition with a good gate, so let’s hope he can reproduce that effort. He gets a bit more weight from that win but he’s such an honest horse, all he wants to do is try his best - so I’m looking forward to riding him.”

The 26-year-old is enjoying a career-best season with 41 wins to his name, including a G3 success in the Lion Rock Trophy Handicap (1600m) back in May.