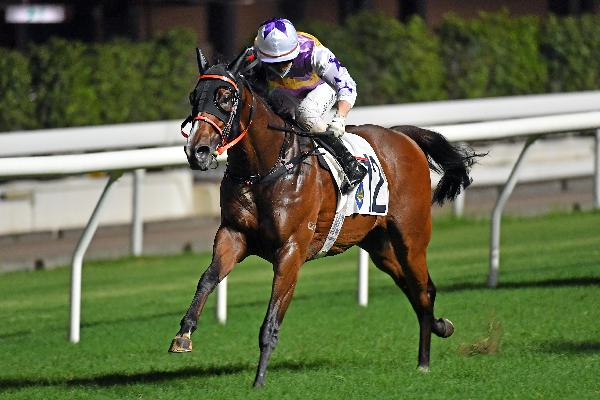 By Leo Schlink
Undaunted by the frustrations of Tsar’s challenging maiden Hong Kong season, Me Tsui’s persistence was doubly rewarded when the British import smashed the Happy Valley 1650m track record and collected a HK$1 million High Achievement Bonus on Wednesday night (26 May).

Formerly trained by John Gosden in Great Britain, where he was a three-time winner with three-year-old handicap success at Ascot Racecourse in July 2020, Tsar endured a wretched initial campaign in Hong Kong – until his blistering victory in the Class 2 Fort Handicap (1650m).

The Kingman gelding’s BMW Hong Kong Derby (2000m) hopes were scuttled when he was scratched at the barriers after getting a hind leg caught over the back of the gates before the start of the Hong Kong Classic Mile on 24 January and he subsequently struggled reproduce the form he had shown in England.

Tsui’s patience was rewarded at the city circuit on Wednesday when Matthew Chadwick used the bay’s light weight (119lb) to advantage to sit outside the speed before lowering the course record with a searing 1m 37.97s gallop – eclipsing Telecom Fighters’ time of 1m 38.55s, set earlier on the program in race three.

“The track is running very fast and he’s got natural gate speed and got himself into a lovely position and had a light weight,” Chadwick said after sealing a double. “He’s still learning. He probably is a bit better with cover so he can settle early in the race, but he did it well enough and I hope there’s more to come.

“He gets himself a bit hot and bothered and so he’s not very robust underneath you. He gets a bit worked up, so that doesn’t help him so when he does learn to relax, he’s going to hit the line better.

“When he hit the front today, he kicked clear and he was a bit wayward still, so there’s something there to work with.”

Tsar’s effort to fend off Green Luck and Savaquin in clock-busting style saw the lightly-raced galloper join the High Achievement Bonus honour roll as the 16th horse this season to collect a bonus for winning a Class 2 contest before turning five.

Nine other horses have collected bonuses and top-ups for winning in Class 1 or above.

Plagued by injury through much of his career, Dancing Fighter vindicated Caspar Fownes’ faith with a record-breaking display to win the Class 3 Java Handicap (1000m) at Happy Valley, underlining the value of perseverance.

Restricted to just 10 starts over three seasons, the Zoustar gelding lowered Stronger’s mark of 56.11s with a blistering display of speed to set a new record of 56.09s with a mid-race sectional of 20.84s between the 800m and 400m.

Having only his third outing for the season, the Australian import – who is owned by popular Hong Kong artist Aaron Kwok – delighted Fownes, who has nursed the five-year-old back to health from chronic leg issues.

“He’s done it very nicely, so I’m very happy. He’s been back and forth from Conghua to Sha Tin, he’s had some proximal ligament issues and it’s taken a while to get him over that,” Fownes said.

“The horse did really early days and then had injuries. It’s like anything, it’s hard to get them back. It’s just nice to get that result – he was comfortable and let down and he looks to be back to where he was.

“It’s a job well done, big credit to the team over in Conghua. He’s got a lot of talent and he’s still relatively lightly-raced. So, I’m just happy to bring him back and hopefully he can come through this race alright and hopefully he can get to another race in a couple of weeks.”

Vincent Ho added more lustre to a phenomenal season crowned by five G1 triumphs by posting his 50th victory of the term aboard Jimmy Ting’s A La King in the second section of the Class 4 Tong Shui Handicap (1200m).

Ting credited the Denman gelding’s success to the application of blinkers.

“Last two starts, he disappointed but if look you at the replay, he was a bit shy of the other horses,” Ting said. “This time, we gave him the blinkers and he is much more comfortable.

“It made a difference. This time, when he passed the horse, he was much more focused.”

Telecom Fighters made it two wins from three starts with success in the Class 3 Merlin Handicap (1650) under Joao Moreira, clocking a new course record of 1m 38.55s – which stood for barely two and a half hours.

Unplaced in 11 starts in his first two seasons in Hong Kong, Great Harvest has posted three wins and three placings from 10 outings this term with Wednesday night’s victory in a class record of 1m 09.62s.

“When he first came to Hong Kong, he was very nervous,” Man said. “I had to work him blinkers to try and keep him calm and he also raced in blinkers.

“As he settled down, I decided to take the blinkers off and he’s been running well.”

Man celebrated a double after Chadwick steered Manna From Heaven to victory in the Class 4 Westlands Handicap (1650m), following the trainer’s instructions to the letter.

The win was the Dragon Pulse gelding’s second from three starts over the city circuit’s 1650m trip.

Peter Ho and Dylan Mo combined with Viva Mama to snare the first section of the Class 5 Whitfield Handicap (1200m) ahead of For Fun’s Sake (Keith Yeung) and After Me (Alex Lai).

“Truly he was knocking at the door. He’s only four and from time to time, he’s been improving,” Ho said.

Antoine Hamelin and Tony Millard closed the programme in style with Sparkling Dragon, winner of the Class 3 Marble Handicap (1200m).