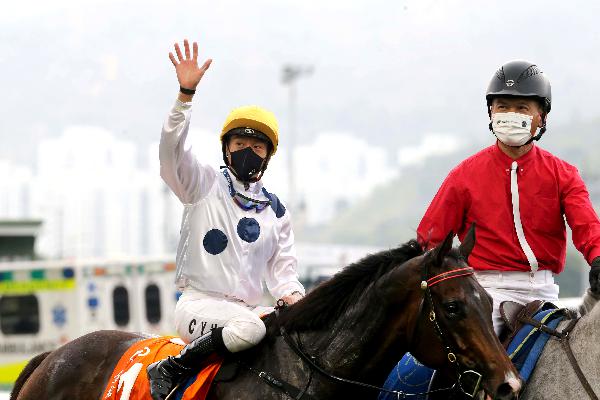 By Leo Schlink
Vincent Ho has soared to joint leadership of the 2021 LONGINES World’s Best Jockey rankings after a career-best pair of G1 triumphs at the glittering FWD Champions Day meeting on Sunday (25 April) at Sha Tin.

Ho shares top billing on 48 points with Australia-based New Zealander James McDonald in a worthy postscript to history-making victories on Golden Sixty in the FWD Champions Mile and Japan’s Loves Only You in the FWD QEII Cup (2000m).

Joao Moreira follows with 40 points, with Englishman Ryan Moore next on 32 points.

Ho is the first local jockey to post two G1 victories on the same day.

While Ho does not expect to retain his position because COVID restrictions are likely to limit his opportunity to press for further elite success in other racing jurisdictions, the 30-year-old is proud of his achievement.

“Of course, it’s something great. But Australian racing, European racing and Japanese racing, they’ve still got plenty of Group 1 races going on. We only have one Group 1 left (Standard Chartered Champions &amp; Chater Cup, 2400m on 23 May), so it’s pretty hard to stay up there.

“At the moment, I’ll definitely screen-shot that ranking.”

Still buzzing from Sunday’s heroics, Ho is indebted to trainers Francis Lui (Golden Sixty) and Yoshito Yahagi (Loves Only You) and the Hong Kong Jockey Club.

“It was definitely an amazing day for me with Golden Sixty winning again and also the QEII Cup with Loves Only You. It was, for sure, unforgettable,” he said.

“I’m just grateful for all the opportunities and for the support of the Club. Experience is everything and when opportunity comes, you welcome it.

“It’s definitely something to be proud of but, at the same time, you always have to be humble and keep learning and to keep improving.

“I love doing that to bring joy to the racing fans and everyone who has supported me, especially in this tough (COVID) situation where you can’t go anywhere. Hopefully this can lighten things up a little a bit.

“When I look back, it’s quite amazing and to realise how lucky I am. To have the ride on Golden Sixty and to have the trust of the connections, I can’t believe how lucky I am to meet a once in a lifetime horse.

“Golden Sixty brought me the recognition overseas and without him I would not be able to ride Loves Only You.”

With 48 wins for the season, Ho will take seven rides at Happy Valley on Wednesday (28 April) – Wonder Express, The Elites, Dionysus Collin, Tailor Made, Fa Fa, Bundle of Delight and Nordic Wellstar.

“Still a few months to go and I need to get my focus back for tomorrow and keep going until the end of the season,” he said.

Chad Schofield, who has 18 wins for the term, is upbeat about the chances of David Hayes-trained pair Super Axiom and Sight Hero.

“He’s a very funny horse mentally, he gets himself very worked up before the race and he can really fire up in track work, too.

“At his second start he went to Happy Valley over 1200 metres, he just pretty much fired up too much and bolted with me and obviously didn’t finish (off),” Schofield said.

“I didn’t ride him last start, but he’s a work in progress, a horse with a lot of ability, a lot of speed. He’s a quiet horse but when he switches on, there’s no stopping him.

“Happy Valley, 1000 metres, they go so quick so there’s going to be no opportunity for him to overdo it, so let’s hope he can get back to winning ways.

“I think he could be a good sprinter. He’s definitely a horse you want to keep to the 1000 (metre) trip at the moment. We are just hoping in time, he will settle down and he will turn into a much better horse if that’s the case.”

Sight Hero jumps from gate three in the second section of the Class 4 Conduit Handicap (1200m) as he chases a breakthrough success at his sixth start.

“He’s got a lovely draw tomorrow night and should run well,” Schofield said.“He’s got that early speed and he can get up on the pace and kick off that as well. Class 4, 1200m, I think it’s perfect for him.

“He’s a big horse and he’s slowly improving all the time and hopefully he can get his first win out of the way.”

Karis Teetan (55 wins) will bid to consolidate his hold on third place in the jockeys’ championship behind Joao Moreira (114) and Zac Purton (98) when he partners Farshad in the Class 3 Breezy Handicap (1650m).

“He’s going well. He’s actually done everything comfortably,” Teetan said of the grey gelding who has won his past two starts.

“To get those two wins, it gets his confidence up and hopefully he can do it again. He’s been getting to the front and sort of stealing the race from the front.

“He’s got that galloping action where he can get them off the bit and he doesn’t do too much himself. Other horses have to work a lot to catch him.

“I will go with a similar plan and he’s got a nice draw.”

Wednesday’s nine-race fixture at Happy Valley kicks off at 6.45pm with the second section of the Class 5 Lyttelton Handicap (1650m).