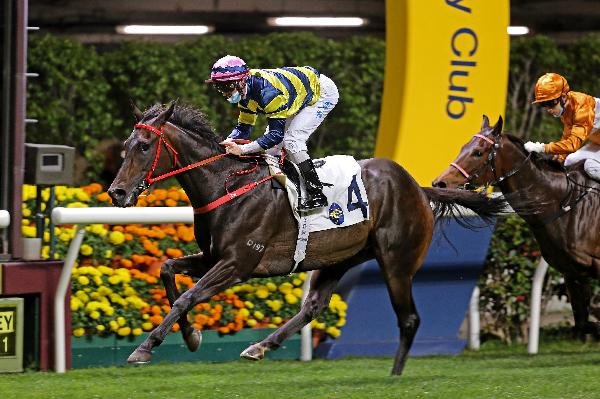 It is the eighth time Purton has registered five wins at a Hong Kong meeting and the first time he has accomplished the feat since 6 May, 2020.

Chasing his fifth jockeys’ title, the Australian boosted his tally to 70 – still well adrift of Moreira (95), who is serving a two-meeting suspension for careless riding, with 37 meetings left in the season.

“It was a nice night, I had a few opportunities and a little bit of luck,” Purton said.

“Luck goes a long away. It’s not easy to do (to ride five winners), just to ride one winner in Hong Kong is hard to do.

“Hopefully things can start to roll along a bit more. I’m not doing anything different – right place, right time - that’s all.”

Ever Force, a lightly-built son of Toronado, registered a second successive win with a gritty effort in the second section of the Class 4 Matheson Handicap (1200m), drawing praise from Purton.

“It was a good tough effort from him. He was out on his feet at the 150m, he did a good job to keep galloping along to get the result,” he said.

“When he came into the straight, he was off balance and not responding but I think his class got him through.

“He’s nice horse, only small but he’s got a big heart. As a three-year-old, carrying top weight is a big challenge. We’ll send him to Conghua now to give him a short break and then hopefully he can win in Class Three,” Shum said.

Lor is optimistic Hurry Hurry Gain can advance through the grades after a hollow success in the first section of the Class 4 Matheson Handicap (1200m).

Given a perfect ride by Purton, the Press Statement gelding cruised to the line under a hold by win by one and three quarter lengths from Sprint Forward and Fortune Hero at just his second start in Hong Kong.

He ran really well over 1000m at his first start and I thought he would like it a little further,” Lor said.

“I had trialled him at Happy Valley already, so I knew there would be no problems but he drew barrier nine - the jockey did a great job. I asked Zac (Purton) to settle forward in the run and he did a great job.

“I think he has good potential. The horse has a good pedigree and I liked the trial video before he came to Hong Kong. He’s not a big horse, but he’s quite strong - I think he’s a nice horse.”

“We had to do some work to get the spot (behind the leaders) but what I liked is that he relaxed mid-race and then when it was time to go again in the straight, he picked up and put them away,” Purton said.

“I think he’s a progressive horse and he’s a bit unassuming. I think he’s be looking after himself a little bit – he did well.”

Alex Lai notched his second win of the season and the first of the year when Manfred Man-trained All Best Friends stormed to victory in the Class 5 Tin Lok Handicap (1650m).

Having his 133rd mount for the 2020/21 season, Lai was understandably delighted to partner his first winner since Moon Peaks on 26 December.

“I didn’t want to push too hard early because the 1650 metres is too far for him,” Lai said.

Dynamic Eagle continued a rich vein of form for Shum and Badel, posting his third win in four starts by landing the Class 4 Percival Handicap (1800m). All three wins by the son of Guillotine have come this season at the city circuit.

Shum and Size shared the training honours with a double. Size leads the trainers’ title 49-47 over Fownes.