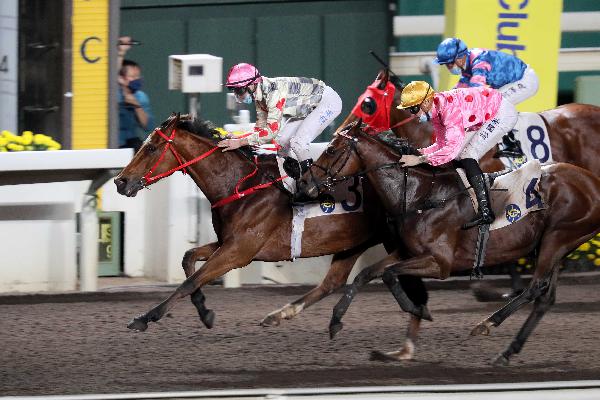 By Leo Schlink
Zac Purton’s pursuit of a fifth Hong Kong jockeys’ championship has continued with a Sha Tin quartet, capped by the success of Glorious Artist in the Class 2 Cuckoo Handicap (dirt, 1650m), as the Australia reduced Joao Moreira’s still imposing lead to 18.

With a dead-heat on Lucky Fun and outright victories aboard Hang’s Decision and Fairy Floss, Purton snared the evening’s feature on Frankie Lor’s Glorious Artist in the HK$2.2 million finale to post his 88th winner of the season.

“That’s four, so that’s nice – hopefully I could do that every meeting,” Purton said, praising Glorious Artist’s tenacity.

“The pace really suited us but we still had to do a lot of work from where we were. It was a tough, brave effort.

“Frankie was convinced I should have been on (stablemate) Kings Shield but I thought the race would be run at a fast speed and I was more partial to riding a horse that could close.

“He had a lighter weight and Kings Shield, well I wasn’t convinced he was in his best form.

“You have to fight hard, it’s very competitive. It means a lot and I’m glad for the support I’ve had so far and hopefully there are going to be better times to come.”

Badel’s aspiration of further success was met the following race when, in a dramatic finish, his mount Sunset Watch (Francis Lui) dead-heated with Purton’s Lucky Fun (Danny Shum), with Moeraki (Matthew Chadwick for Michael Chang) only a short head away in third.

Delivered late by Purton, the greybeard galloper’s victory in the Class 4 Sand Martin Handicap (dirt, 1650m) cemented the bond between the New Zealand import and So.

“In my first season in 2013/14, I went to the Karaka Sales in New Zealand and he was the first horse I picked and bought at those sales,” So beamed. “It’s amazing - he’s a very healthy horse. He doesn’t ever need an injection in a joint, he’s very sound.

“He’s so honest and you can’t believe what he’s done considering it’s so competitive in Hong Kong.

Since then, he has developed into an incredible money-spinner for his connections, triumphing twice this season by narrow margins.

Bound for retirement at the end of next season, the veteran provided Purton with a race-to-race double.

The reigning champion rider, Purton successfully combined with Fairy Floss for Paul O’Sullivan in the Class 5 Tropicbird Handicap (dirt, 1800m) as the son of Guillotine posted his second win from 26 starts in Hong Kong.

Frankie Lor attributed All For St Paul’s fourth victory of the season – the latest in the Class 3 Parus Handicap (dirt, 1800m) – to maturity after Matthew Poon guided the Magnus gelding to a brave win.

“I think this season he is more mature, last season he was still learning,” Lor said. “He is much better in the mornings and I also sent him to Conghua, which is a good place for horses.

“He came back to Hong Kong from Conghua and has since looked much better.”

Karis Teetan enhanced his reputation as Hong Kong’s “King of the Dirt” with victory in the Class 5 Tern Handicap (dirt, 1200m) aboard Little Thunder for Tony Millard.

It was the Mauritian’s 11th win this season on the All Weather Track – two more than his nearest rival Purton.

Maia notched his third win in as many meetings with a perfectly executed ride.