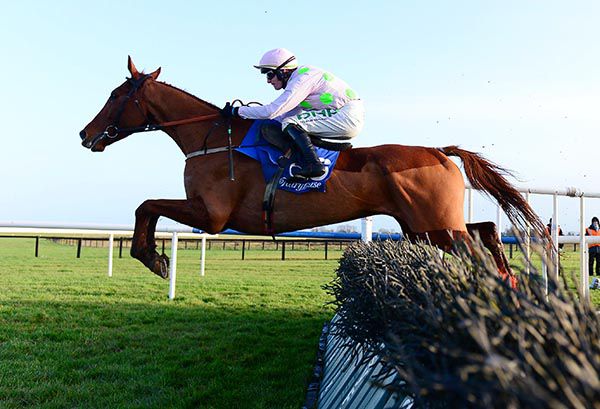 At odds of two to one on, point-to-point winner Monkfish delivered at the second time of asking over flights in the Irish Racing Yearbook Maiden Hurdle at Fairyhouse.

A 235,000 pound purchase out of the Cormac Doyle yard after winning at Stowlin in April 2018, Monkfish was never far away here, taking a keen hold under Paul Townend.

Owned now by Susannah and Rich Ricci, and trained by Willie Mullins, the successful son of Stowaway went clear from two out.

The five-year-old stayed on well under hands and heels inside the final furlong to comfortably account for Time To Get Up by eleven lengths.

“He was very green the last day and he had more time to do things today. He’ll stay novice hurdling over staying trips," said Mullins.

“He’s a big three-mile chaser (in the making) and has taken all this time to come right. He’s still as green as grass and I’ve no big plans for him.”

Betfair introduced the winner at 25/1 for the Albert Bartlett Novice Hurdle.

Under the provisions of Rule 90, the Stewards allowed Coalbrook Bridge trained by Catherine Hamilton, to run on receipt of the trainer's written assurance that the error identified in the certification of vaccinations would be corrected in accordance with Rule 91 within the timeframe specified.

The Irish Horseracing Regulatory Board Veterinary Officer examined Osmotic trained by Gordon Elliott, at the request of the Stewards and reported the animal to be blowing hard post race.

Catherine Hamilton, trainer of Coalbrook Bridge, reported to the Clerk of the Scales that her charge lost a front shoe.