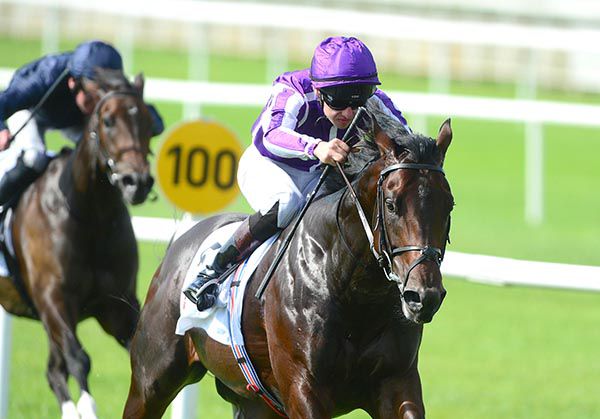 Pretty Pollyanna is to drop back in trip for the Darley July Cup at Newmarket after she failed to see out the mile in the Coronation Stakes at Royal Ascot.

The Michael Bell-trained filly had finished second in the Irish 1,000 Guineas over that longer distance on her previous start, but could not match that performance and faded into seventh place behind Watch Me after being prominent for six furlongs.

Pretty Pollyanna won the six-furlong Duchess of Cambridge Stakes by seven lengths at the July meeting last year and connections feel that will stand her in good stead for the Group One sprint.

“I think we are looking to revert to sprinting and she’s going to take her chance in the July Cup,” said Bell.

“It was visually her most impressive performance over that same course and distance last year, so it would seem to make sense.

The Kevin Ryan-trained Brando will try to make it third time lucky after being second and third in the last two runnings, after connections decided to opt out of Royal Ascot.

“We were never going to take him to Royal Ascot — it’s quite hard for these sprinters to be at their best for both Ascot and the Darley July Cup and he’s got such good form at the two Newmarket tracks that it made sense to take him there as a fresh horse,” said Ryan’s son and assistant, Adam.

“For some reason he enjoys running downhill. We can’t put our finger on it, but he loves both Newmarket courses.

“The Darley July Cup is a very difficult and prestigious race, especially nowadays when it is the culmination of a long wait for the three-year-olds to take on the older horses for the first time.

“Brando’s been placed in it twice before so if he were to win it this time it would be fantastic for us and live long in the memory.

“He’s got form on all sorts of ground. As he gets older maybe he prefers a bit of juice in the ground but I wouldn’t be worried about fast ground — the main thing with him is to have a truly-run race and you’ll certainly get that at Group One level.”

The 22 acceptors include Martyn Meade’s star three-year-old Advertise, who bounced back to form with victory in the Commonwealth Cup at Royal Ascot.

Ten Sovereigns, who was fourth that day, is one of six possibles from the Aidan O’Brien stable.

Dream Of Dreams, who failed by just a head to catch the now-retired Blue Point in the Diamond Jubilee Stakes at the Royal meeting, could attempt to go one better for trainer Sir Michael Stoute.