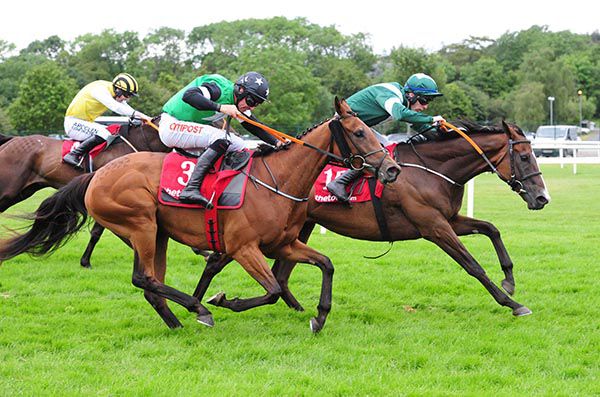 Davy Russell brought up a 41/1 Cork double in the Tote Backing Your Team Handicap Hurdle on Gordon Elliott’s Smiling Eliza (14s into 11s).

Russell had won the previous race on Charles Byrnes’ Turnpike Trip but here he relegated the Limerick trainer to the runner-up spot.

Byrnes’ Give Battle was favourite under Kevin Brouder and he was just touched off by a nose.

Give Battle just couldn’t master the front-running Smiling Eliza after travelling well to get there at the last.

"She was very game and had the four year old allowance. I felt before the race that she had maxed out but again the man who trains her finds these opportunities," reflected Russell.

"We changed it a little today and there didn't seem to be much pace and she seemed happier out in front. You wouldn't do it every day but it worked today and she jumped great and battled well after the last. I'm delighted."

The Stewards enquired into an incident on the approach to the straight involving Touch Of Gold ridden by P.D. Kennedy, unplaced and Youngnedofthehill ridden by C.J. Orr, unplaced, where it appeared that Youngnedofthehill ran short of room. Evidence was heard from the riders concerned. Having viewed the recording of the race and considered the evidence, the Stewards were satisfied that no interference had taken place and took no further action.

P. Townend, rider of Miss Chevious Girl trained by W.P. Mullins, reported to the Clerk of Scales that his mount made a bad mistake at the third last hurdle.

The Stewards requested a report from Gordon Elliott, trainer, as to the apparent improvement in form of Smiling Eliza, placed first, as compared with its recent run. Camilla Sharples, Authorised representative for Gordon Elliot, reported that their charge was an honest filly who always gave her best. Since her last run at Ballinrobe on the 27th May where she disappointed, her training regime was changed and this appears to have sweetened her up which may have contributed to the improved performance. Having considered the evidence the Stewards noted the content of the report.