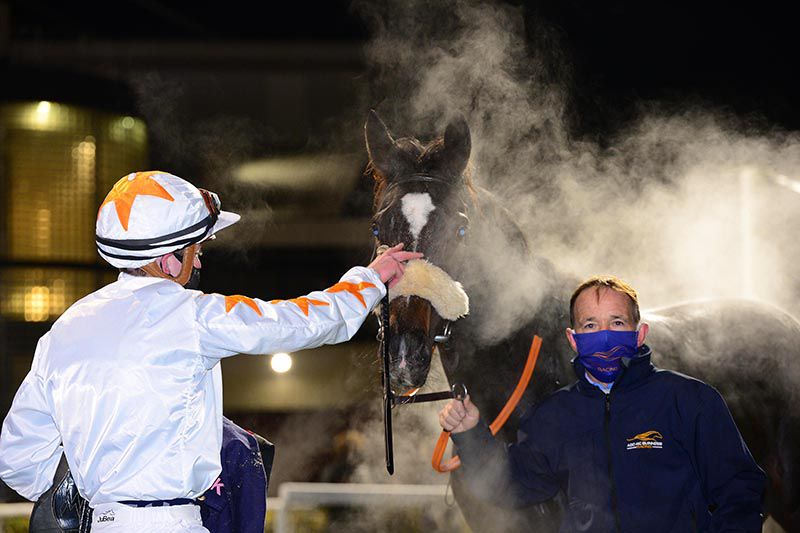 Pure Nature gets a pat from jockey Adam Farragher after her win, with groom Damian Duffy
© Photo Healy Racing

There was a double on the card for Ado McGuinness in the finale tonight, as in the Story Of Dundalk Stadium Book Buy Online Handicap, Pure Nature took the honours in the hands of Adam Farragher.

A three-year-old daughter of Dansili, this course and distance winner from September, was a market mover through the day.

She hadn’t come up to expectations at Fairyhouse since then, when failing to cope with testing terrain, and she clearly appreciated the return to the polytrack on this occasion.

After getting a patient steer from towards the back, the Phoenix Thoroughbred Limited owned filly was delivered down the inner with her effort in the straight.

The 6/1 victor eventually beat Construct and Paso Doble by a length and half a length.

McGuinness had earlier sent out a one two in the 6.30 contest when Raphael beat War Hero

“It wasn't the plan to do what we did but he gave her a dream ride. She got a lovely run around the outside,” said the Dublin handler.

“I knew they were going to go fast and I told him to take his time with her. They went good and fast and started to stop.

“He said he was thinking halfway around 'what am I going to tell this man when I come in'!

“She's going to make into a very nice juvenile hurdler at some stage. She's a smashing filly, she was slow to come to hand but she's really come on now.

“She loves this surface and we'll probably come back here at some stage.

“I ran her under a penalty the last and I was half forced as I thought the handicapper was very harsh on her having given her 11lb for winning here.

“It was bottomless and she just hated it. In fairness with some fillies they don't like going back to back either.

“We gave her a bit of time and she's freshened up really nicely. I have to thank all the lads at home for their hard work.”

G.F. Carroll, rider of Construct (GB) trained by John C. McConnell, reported to the Clerk of Scales that his mount went right up the straight.

W.J. Lee, rider of Humaniste trained by E. J. O'Grady, reported to the Clerk of Scales that his mount never travelled.

S. Foley, rider of Psyche (GB) trained by Mrs John Harrington, reported to the Clerk of Scales that his mount moved poorly.