6/1 Naas hat-trick for Mullins and Townend 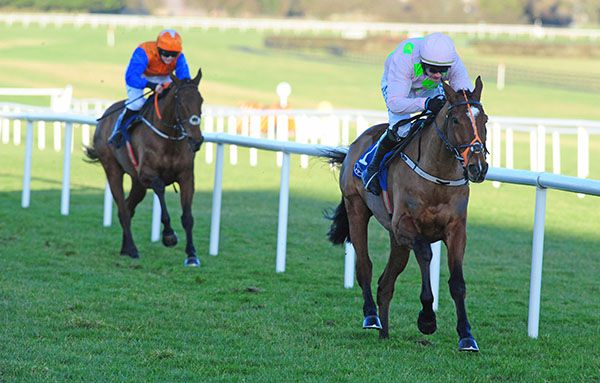 A 6/1 Naas treble was completed for Willie Mullins and Paul Townend when Bapaume (5/4 favourite) made light work of the opposition in the Kildare Post & Kildare Now Beginners Chase.

Unfortunately the two fences in the straight were omitted owing to the low-lying sun but given the aptitude he showed for fencing it might have suited Bapaume even better if they were in.

The Grade One winning hurdler, on his second start at this game and down in trip, accounted for Spyglass Hill and Caravation by five and a half lengths and four and three parts of a length.

Bapaume was always prominent, and he disputed the lead at the third. Headed before the next, the French-bred led from the sixth and made the rest. He went clear two furlongs out, and soon ridden stayed on well under pressure inside the final furlong to win. Yukon Lil and Tiger Tap Tap were the other Closutton winners.

“He's electric to jump. He jumps nearly as good as any two-miler and we know he stays from his hurdling days,” said Townend.

“He's not the biggest in the world but he has loads of scope. He'll have to build on that again but he brings a high level of hurdles form to chasing as well.

“Here, especially without the fences, it was a long way up the straight but he was fine and it's job done.”

Owing to the low lying sun, the Stewards granted permission for fences # 1 and 2 (the 2 fences in the straight) to be omitted from this race.

The Irish Horseracing Regulatory Board Veterinary Officer examined Press Conference trained by Mrs John Harrington, at the request of the Stewards and reported the animal to be stiff behind post race.