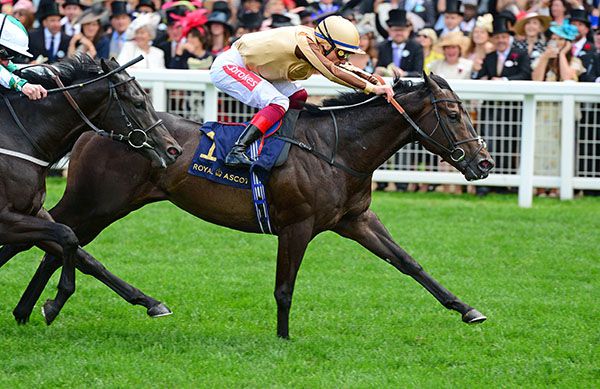 A'Ali is pushed out by Frankie Dettori
© Photo Healy Racing

Frankie Dettori steered A'Ali to a narrow victory in the Norfolk Stakes at Royal Ascot.

Despite having to make do with the runner-up spot on his racecourse debut at Ripon a fortnight ago, plenty was expected of Simon Crisford's juvenile in this five-furlong Group Two as he was towards the head of the market at 5-1.

The well-backed 13/8 favourite Sunday Sovereign moved smoothly to the front racing inside the final two furlongs, but his effort petered out once push came to shove and A'Ali quickly powered into a clear advantage.

After meeting traffic problems, the Richard Fahey-trained Ventura Rebel was really finding his stride late in the day, but was a neck down at the line.

Karl Burke's Dubai Station was best of the rest in third, with Sunday Sovereign ultimately disappointing in eighth.

Crisford said: "He's a top-notcher. Those who analyse figures with sectional times were screaming about this horse from the rooftops after his run at Ripon.

"I wouldn't have run him if he didn't gallop out at Ripon. After the winning post he galloped out super strong. I knew then to go for the Group Two and not go for a novice at Wolverhampton.

"It's great because I'm surrounded by a lot of strong supporters of mine over the years like Sheikh Mohammed and his great friend, Sheikh Duaij, who owns this horse. He's from the Royal family of Bahrain. They were all cheering him in and it counts for a lot.

"The owner is steeped in racing history. His uncle used to own Weth Nan, Jellaby and Ahonoora. He's always been a huge enthusiast. This is his first runner at the Royal meeting.

"I know it looked like he was slowing down in the closing stages, but I think he'll get six furlongs, no problem. He's out of a Motivator mare who stayed a mile as a two-year-old. He's a good colt.

"I hadn't thought about it being a Breeders' Cup win and you're in; I think the doors are open for everything.

“He will be campaigned as a two-year-old. He’s small, he’s neat, he’s quick and he’s tidy.”

Crisford, of course, was formerly the long-standing racing manager at Godolphin, who were Dettori’s employers for many years.

Dettori said: “I spent many years working with Simon. We both went our separate ways, he started training and it brings back some great memories — I’m really delighted. He’s been great to me through my career.

“Unbelievable performance by the horse. He travelled like the winner all the way. He made my life easy.”

Meanwhile, Fahey said of Ventura Rebel: “He ran a blinder and we are pleased with him. There are no excuses really and they were a long way clear of the rest. He is a horse that will progress and is going the right way. He has got a good mind.

“We were always coming here. The soft option was the Windsor Castle, but we have come here and nearly won. Paul (Hanagan) was adamant that he is OK at five for the minute.”

There are no excuses really

Burke said of his representative: “We are delighted with that. Ahmed (Alshaikh, owner) wanted to run in the Coventry, but that is the toughest of the races. Six furlongs is his trip, but we decided between the Norfolk and the Windsor Castle and we thought we would probably head to the Norfolk.

“It was probably quicker ground than when he won last time. Jamie Spencer gave him a great ride and it was the plan to always ride him to finish. If he had him handy early on I don’t think he would have finished as well.

“We will aim him at the Gimcrack, as the owner won the race last year. We will give him a run over six furlongs before that.

“The July Stakes is on an undulating track and Jamie rode him at Nottingham and he didn’t really handle that.”