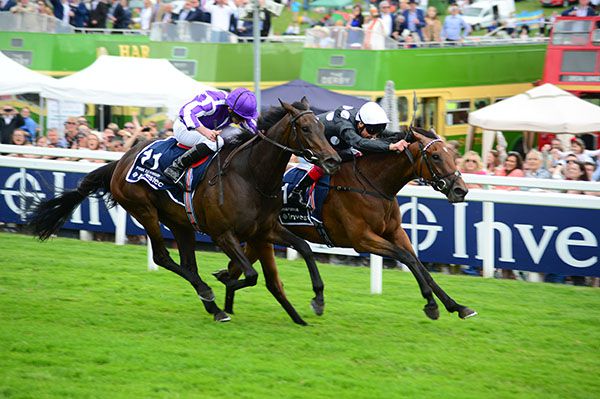 Frankie Dettori steered Anapurna to a thrilling victory in the Investec Oaks at Epsom.

Trainer John Gosden fielded two runners in a bid to win the fillies’ Classic for the third time, with impressive Cheshire Oaks heroine Mehdaayih the 11-4 favourite under Robert Havlin and Anapurna an 8-1 shot after landing the Lingfield Oaks Trial.

While Mehdaayih pulled for her head early on and met significant traffic problems, Dettori always had Anapurna in prime position and although she was under pressure early in the straight, the daughter of Frankel responded admirably to her rider’s urgings.

Aidan O’Brien’s Pink Dogwood displayed an electric turn of foot to grab the lead racing inside the final two furlongs — but Anapurna dug deep and got up to score by a neck.

Pink Dogwood was a clear second, ahead of her stablemate Fleeting in third.

Gosden said: “A brave performance by the filly and brave from the jockey. He found a gap on the inside. Unfortunately our other filly (Mehdaayih) got nothing but smashed and bumped around everywhere.

“I thought coming past the furlong pole (Ryan) Moore (on Pink Dogwood) had got it, but somehow this filly found the courage of reserves and energy to get her head back in front.

“The last 50 yards are uphill and she basically outstayed the other filly.

“Full marks to both riders and both fillies — two magnificent fillies.”

The victory was a first British Classic for Frankel as a stallion.

“I love the way she fought here, she was passed but put her neck out and fought for it.”

Looking to future plans, Gosden said: “She has had a hard race today. I wouldn’t be in a hurry to run her back. I’d love to give her some time to develop, as she has a good frame on her.

“I wouldn’t necessarily say we are going to charge off to the Ribblesdale or Ireland. I think a mile and a half is spot on for her. At the end of the year you could also run her in the Prix de Royallieu.

“She stays, but she won’t run in the St Leger.”

Explaining why he opted to ride Anapurna over Mehdaayih, Dettori, who was given a two-day ban for his use of the whip, said: “I thought the other one had a better turn of foot, but I knew mine would stay really well — it was just a matter of getting a good run round and I did.

“I knew she would stay well and she has improved since Lingfield. We all talked about it and we said that this (him riding Anapurna) was the correct way of doing it.

“The only thing I was afraid of was inexperience, but I had a great run round. For a minute I couldn’t get out and it took a furlong to get going and Ryan had three lengths on me, but I knew she would come home good.

“I was getting him and then in the last 30 yards I got him. Beautiful.

“She is completely different to Lingfield and she travelled much better today — at Lingfield she was all at sea, but that taught her a lot.”

The 48-year-old added: “I absolutely love it. My first one (Oaks on Balanchine) was 25 years ago and I’m still here.”

Mark Weinfeld, managing director of Meon Valley Stud, said: “I didn’t think we going to get there, so it is absolutely fantastic. I’m speechless. We’ve been placed before, but what a result. I’m over the moon.

“John has always said he liked her. She won her trial very well — we didn’t know how good she was and how she would handle the course, but she did it nicely. I think Frankie gave her a super ride.”

Weinfeld, who also has a big date in the Derby on Saturday with Telecaster, added: “I think I will have a large glass of champagne later. That is absolutely brilliant.”

O’Brien said of Pink Dogwood: “She ran a great race. It was her first run over a mile and a half, but she ran a lovely race.

“I don’t know if she was outstayed. She just got collared late and when they do you can always say things like that, but you are never sure.

“We will see how she is and will decide what to do next time.”