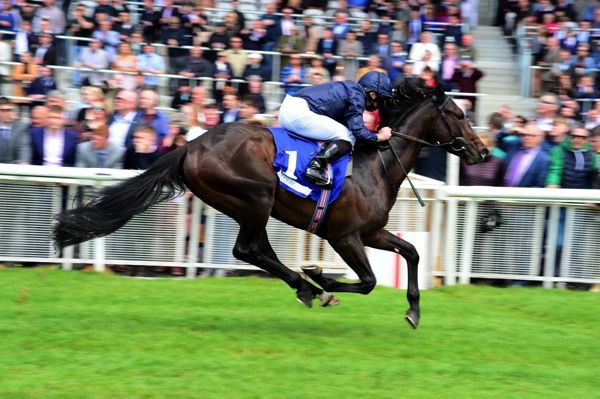 Arizona heads a four-strong team for Aidan O'Brien in the Coventry Stakes at Royal Ascot.

The Ballydoyle maestro has saddled a record eight previous winners of a Group Two contest widely considered as the most prestigious two-year-old race of the week in Berkshire — and he appears intent on adding to his tally on Tuesday.

Arizona is very much the stable's first string, having stepped up from his runner-up finish on racecourse debut at the Curragh in early May with a hugely impressive eight-length victory at the same track three weeks later.

The No Nay Never colt is joined by stablemates Fort Myers, Royal Lytham and King Of Athens.

Speaking in a stable tour for www.attheraces.com, O’Brien said of Arizona: "I've been very happy with him since his last run, and the plan is to run him in the Coventry.

"He is a very straightforward colt — and with the amount of improvement he showed from his first start to his second, you’d have to hope he can improve again."

The home team is headed by the Richard Hannon-trained Threat, who made a big impression when making a successful start to his career at Newmarket’s Guineas meeting.

Richard Hannon senior won the Coventry with Rock City (1989), Canford Cliffs (2009) and Strong Suit (2010) - and his son is confident Threat can get his name on the roll of honour.

He told Unibet: "I thought Threat would run well (at Newmarket). I wasn’t really sure what we were taking on, and there weren’t many runners in the race, but his homework has been exceptional,

"I think he might just be one of the best two-year-olds we’ve had here for a while. I’m very hopeful — I love the horse and I think he is probably our best chance of the week."

Other contenders in a field of 17 include Archie Watson’s runaway Goodwood winner Guildsman and Mark Johnston’s Pontefract victor Monoski.

The Closutton maestro has saddled four of the last seven winners of the two-and-a-half-mile handicap, including the last two in Thomas Hobson and Lagostovegas.

With Ryan Moore in the saddle, Buildmeupbuttercup is sure to be popular with punters in a race that also features Gordon Elliott’s pair of Mengli Khan and Batts Rock - and Snow Falcon from Noel Meade’s yard.

The latter was last seen finishing down the field behind Kemboy in the Punchestown Gold Cup.

Meade - who enjoyed a Royal Ascot winner in 1978 with Sweet Mint — said: "We had in our heads that we might run Snow Falcon in this last year, but we couldn't, so we’re looking forward to having a go this year.

"Hopefully the ground will stay easy, and he’s in good form.

"We’ve got a good man riding him (Colin Keane) and we’ll see what happens."

The concluding race on day one is the Wolferton Stakes.

Likely players for this Listed event include Johnston’s Elarqam — who got his career back on track with an assured success at Goodwood on his latest appearance — Aidan O’Brien’s high-class filly Magic Wand and last year’s Irish Derby hero in Joseph O’Brien’s Latrobe.