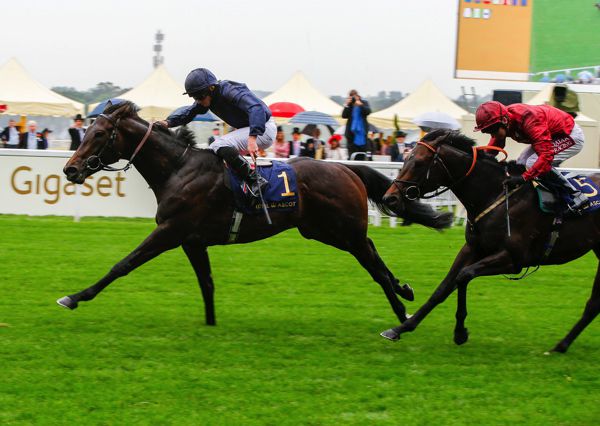 Royal Ascot winner Arizona returns to action in what looks a red-hot renewal of the Darley Prix Morny at Deauville on Sunday.

While the form of the Coventry Stakes has been backed up elsewhere, the Aidan O’Brien-trained No Nay Never colt has enjoyed a break, with this race in mind before a crack at the National Stakes at the Curragh on Irish Champions Weekend.

O’Brien, who also runs Richmond Stakes third Royal Dornoch, said: “He’s in good form, everything is right and we’ve been very happy with him since Ascot.

“Hopefully the ground won’t get too soft, but we’re very happy with him.

“He had a break since Ascot, but he’s ready to go again now.”

Dangers abound to Arizona, with Frankie Dettori maintaining his partnership with Mark Johnston’s Raffle Prize. Dettori rode the Mark Johnston-trained filly to win the Queen Mary at the Royal meeting, before defying a penalty in the Duchess of Cambridge Stakes at Newmarket.

However, the Italian has also ridden Simon Crisford’s A’Ali to success in the Norfolk Stakes and the Prix Robert Papin, so the decision will not have been an easy one.

Johnston said: “This is obviously a very tough race and there is no getting away from it. They are tough races up at Group One level. That is what we are up against and we will see how she goes, but she is fine and in great shape.

“I think she is versatile regarding trip as she has got the speed, but also that bit of stamina.

“The owner was a little bit concerned about the ground over there. She has won over five and six furlongs and from good to soft to good to firm so we are quite happy with all conditions. Hopefully that is the sign of a good horse.”

Clive Cox won the Morny in 2012 with Reckless Abandon and this year is represented by Golden Horde.

Fifth in the Coventry, he took a big step forward to win the Richmond Stakes at Goodwood.

Cox said: “They’ve had a fair drop of rain, which is unexplored territory for us, but I’m very happy and he is in great form.

“I’m thrilled with the way he has come back since his success in the Richmond. Hopefully he is quite a nice horse going forward and we are quite excited.

“He has got a bit of size and scope about him and he is not just about this year, he is a horse to look forward to next year. I’m very pleased and proud to have him.”

The raiders will not have it all their own way, though, because Andre Fabre’s Earthlight is unbeaten in three races and looked very smart in winning a Group Three last time out.

Freddy Head’s Devil, winner of his only race to date, completes the top-class field.