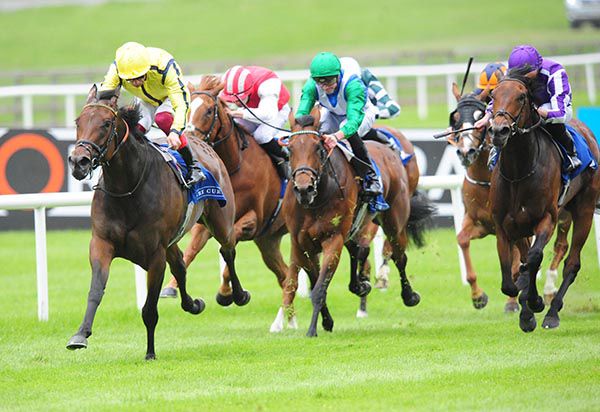 Beshaayir bids to execute a long-term plan when she tackles Group One company for the first time in the Tattersalls Falmouth Stakes at Newmarket this afternoon.

Trainer William Haggas revealed he has had the mile showpiece in mind for his Iffraaj filly since she took the step up to Group Two class in her stride when making all to lift the Lanwades Stud Stakes at the Curragh seven weeks ago.

“We’re very happy with her, and this has always been on our radar since she won a Group Two. We decided it was a Group One next — and we planned to come here.”

Beshaayir kept the Aidan O’Brien-trained I Can Fly at bay by a length and a half in Ireland, and had her own stablemate One Master back in fourth place.

One Master has since finished a highly-creditable third behind Lord Glitters in the Queen Anne Stakes when taking on the boys at Royal Ascot.

It was not the intention to run One Master in this race, but Haggas felt it was too good opportunity to miss when the race cut up.

“She ran a marvellous race at Ascot and she’s in very good form,” he said.

“I wasn’t planning to run here, but there were so few entries.

“We’re not quite sure she got home at Ascot, so we will have to be careful, but she’s in good form. I’m very happy with her.”

Roger Varian is responsible for the two three-year-olds in the line-up, Qabala and Mot Juste, and feels there is little to choose between them.

On form, it would appear Qabala has the edge because she finished ahead of her stablemate in both the Nell Gwyn Stakes and 1000 Guineas. However, Varian finds it hard to split the pair.

“I have to stick with what I said before Newmarket in that I didn’t think there was much between them,” he said.

“The Nell Gwyn showed there wasn’t much between them, and the 1000 Guineas run didn’t reflect their true ability.

“I think Mot Juste is a better filly than her run in the 1000 Guineas. On race form you would have to put Qabala ahead of Mot Juste — but to watch and get to know them every day, there is not much between them.

“I think both fillies are capable of running well — though I’m not sure which will finish in front of the other one.”

Qabala won the Nell Gwyn and was third in the fillies’ Classic at Newmarket, but nothing went right for her in the Irish equivalent at the Curragh.

“I think that everything that could go wrong went wrong for her,” said Varian.

“She was slow away and got messed around early in the race. The race was dominated by being handy, and the winner was a good filly that made all.

“She got knocked around early in the race; she angled out for a run and she couldn’t get out and the race was gone.

Varian has put a line through Mot Juste’s 1000 Guineas run, and prefers to judge her on her second place behind Qabala.

“I would forgive her Newmarket run because she got knocked sideways at a vital time. I’m not sure she was making ground at the time, but I’m happy to put a line through it,” he said.

“I hoped she would run big, going into that race. Her Nell Gwyn run reads well.

“She has always run well at Newmarket, bar the 1000 Guineas, and she is in really good shape.”

Irish raider I Can Fly was third to the Haggas-trained Move Swiftly in the Duke Of Cambridge Stakes on her latest outing — one place ahead of Sir Michael Stoute’s Veracious, who completes the line-up.