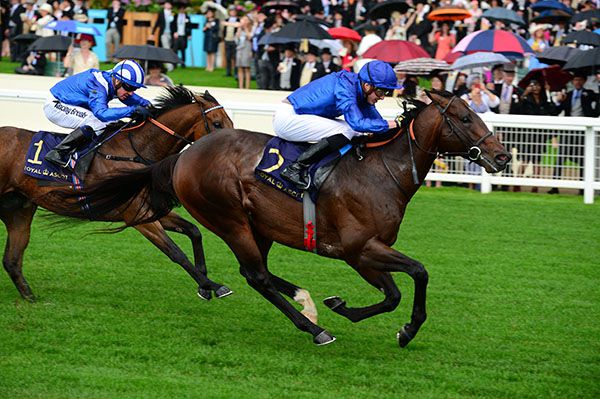 Blue Point confirmed his superiority over Battaash to win back-to-back renewals of the King’s Stand Stakes at Royal Ascot.

Billed as a match between the big two, it developed into everything race fans wanted inside the final furlong — but Charlie Appleby’s five-year-old was pulling away at the line.

In the early stages Jim Crowley on Battaash was tracking Houtzen, but they were on their own and just after halfway Crowley took the decision to track over towards the main group.

As Blue Point moved to the head of that pack, Battaash travelled up strongly alongside him, only for James Doyle’s mount to see it out the strongest.

The 5-2 chance won by a length and a quarter, with Soldier’s Call just pipping Mabs Cross for third to prevent an identical result to last year.

Appleby said: “I was concerned the ground might get too soft for him, but it can rain as much as it likes now!

“We’ve all been very much involved in this horse. It’s great for William (Buick) being here and the team at home have done a fantastic job with this horse.

“To do back-to-back wins in this race is fantastic, as I knew he’s going to have a great career at stud when he retires at the end of the season.

“During the winter we saw how much more professional he was. He’s strengthened and when William got off him after his first start in Dubai he said he was a different animal. He’s the finished article now.

“I’ve got a great team behind me and it’s great for Sheikh Mohammed and his family being here.

“We’ll give him a little break and work back from the Abbaye at some stage.”

Doyle said: “It worked out very well, very smooth, just how we saw it on paper.

“I knew we’d have to do it on our own and while I wasn’t always in front, I was leading my batch and I thought it was a real testament to himself.

“Battaash came to him late on and he held him off. He’s more electric on faster ground, but he’s a real tough horse and the good ones go on anything.”

On standing in for the sidelined Buick, Doyle said: “This is why I’m in place, if things go wrong.

“It must be very difficult for Will being here watching the good horses, but I guess it will soften the blow knowing his best mate is riding them. He was one of the first to come over and give me a hug.

“It’s disappointing not to have him beside me, but he’ll be back soon and that’s the main thing.”

Charlie Hills said of Battaash: “I think he probably just got a little bit outstayed again. It is just testing his stamina a bit.

“He was drawn wide and unfortunately the horse (Houtzen) we thought was going to take us on early into the race slipped out of the stalls.

“We just got a little bit detached from the race and he had to make his move a little early, but he ran a really good race. The race worked out how we envisaged it. We will go to Goodwood now for the King George.”

Archie Watson was thrilled with Soldier’s Point: “He ran a huge race. He ran against these horses at two, which very few horses do. That is way to ride him and he showed a lot of speed today.

“He ran a very good race at York and has taken a big step forward today. We don’t have to be too clever to where we run him, either. I know he is good enough to win one of these and I hope he can.

“Goodwood was the one place where he didn’t like the track, so he won’t be going there and it is only a Group Two. All roads lead to the Group Ones at the end of the season.”

Michael Dods added of Mabs Cross: “I think she ran her race. If anything the biggest problem was they weren’t going hard for a Group One sprint.

“At halfway she was travelling too well, as I would rather see her off the bridle, as when she is she really comes home. She filled a similar sort of position last year.

“I’d imagine now we will go to the Nunthorpe.”