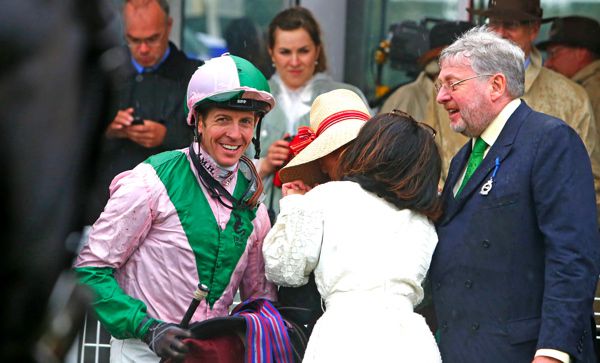 Lavender’s Blue sprang a minor surprise with an impressive display in the Betway Atalanta Stakes at Sandown.

Having finished third in the Coronation Stakes at Royal Ascot and in a Group Three at Goodwood at the start of August, the Sir Michael Stoute-trained Jubiloso was widely expected to make it third time lucky at Pattern level under Ryan Moore.

The well-backed 4-5 favourite was sent straight to lead, but it was clear from early in the straight that it was not going to be plain sailing for the market leader and she weakened quickly late in the piece to finish a disappointing seventh of eight runners.

Amanda Perrett’s Lavender’s Blue had looked an exciting prospect when making a winning debut at Newmarket in the spring, after which she finished second in Listed company at Newbury before trailing home last of 14 in the Investec Oaks at Epsom.

The daughter of Sea The Stars was a 12-1 shot on her return from a three-month break in this one-mile Group Three and from two furlongs down it just looked a question of whether the gap would come, as she was travelling powerfully in the hands of Jim Crowley.

Once the split did appear, Lavender’s Blue accelerated quickly to put the race to bed and she was ultimately well on top as she passed the post a length and a half to the good over Duneflower in second, with Look Around just a neck further away in third.

Perrett said: “She travelled well and also when she won her maiden she travelled nicely. It was probably a mistake in hindsight to go for the Oaks, but we’re back in winning ways and there’s lots to look forward to.”

Lavender’s Blue is owned by Benny Andersson of ABBA fame and Perrett hopes he will be on course for her next appearance, which will likely be in the Kingdom of Bahrain Sun Chariot Stakes at Newmarket on October 5.

“She has done nothing wrong today and she deserves her chance at Newmarket in the Sun Chariot, as long as the ground is OK, because she wouldn’t want it too soft at the moment,” the trainer added.

“Benny was on the phone and he was very excited. He’ll be back for Newmarket.”

Crowley was impressed by the performance, adding: “She’s a nice filly. It just didn’t work out for her at Epsom and she didn’t stay.

“Amanda has done a great job in giving her time to get over it, because she didn’t have a good experience there.

“She’s a high-class filly in the way she put that to bed. That’s her trip and hopefully she will go on from that.”