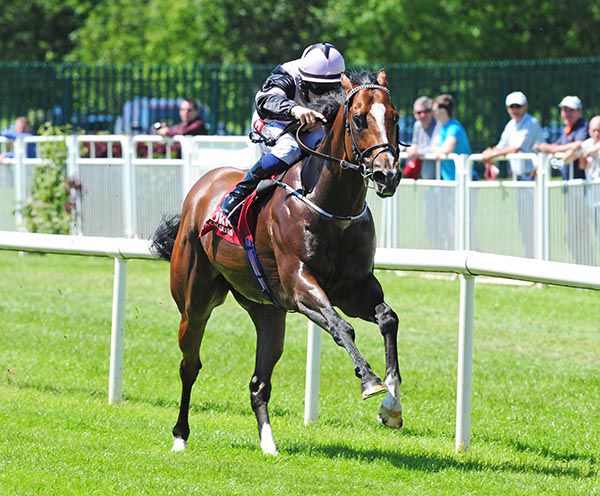 Darren Bunyan is bullish that he can win a Group 1 on Longines Champions Weekend with Hit The Bid, claiming that the weather cost him a top-level success 12 months ago.

Bunyan has 15 in training and his stable star, Hit The Bid, is one of 15 left in Ireland's only Group 1 sprint for older horses, Sunday's Derrinstown Stud Flying Five Stakes at the Curragh.

A scatter of overseas rivals, such as Caspian Prince, Soldier's Call and Mabs Cross, are ready to take on a strong Irish team, which also includes the Eddie Lynam-trained Soffia.

However, a piece of work that Bunyan witnessed on Tuesday morning before heading off to the sales at Ascot had him full of confidence.

"I am very happy with him, and the same goes for Chris Hayes after he worked at the Curragh this morning. He is definitely a better horse than we had last year and what I saw at Tipperary last time had me absolutely delighted.

"Fair enough, on the face of it wasn't a great run, but it was his first since Dubai in March and he was entitled to come on from it. Sprinters can peak at five and I think that's the case with him. I've seen huge improvement now fitness-wise. I'd prefer to have him going to the race Sunday than be taking him on."

Bunyan's main concern is the weather. He admitted: "I have a creek in my neck watching the skies! It's all about tiny fractions in these Group 1 races and 12 months ago I went to bed delighted on the Saturday night but woke up at three o'clock in the morning listening to the rain, which cost us a Group 1 win.

"He was only beaten a length and a quarter then after all. He's been unlucky but he has a great set of owners who always leave it to me to make plans and it would mean everything to win a Group 1 at my local track."

The Flying Five is one of four Group 1 races at the Curragh on Sunday. A total of 15 have been left in both the Moyglare Stud Stakes and Goffs Vincent O'Brien National Stakes, with 18 remaining in the Comer Group International Irish St Leger.

Pinatubo, trained by Charlie Appelby, is still on course to take on the Aidan O'Brien-trained Armory, though Ballydoyle has nine other possibles, including Arizona and Innisfree in the juveniles' race.

In the Comer Group International Irish St Leger, Capri and Kew Gardens have been left in by Aidan O'Brien, while Joseph O'Brien has left in Latrobe, Buckhurst, Master Of Reality and his new addition, Twilight Payment.

Jessica Harrington has left Albigna, Alpine Star and Cayenne Pepper in the Moyglare Stud Stakes, with Daahyeh set to run for Roger Varian.