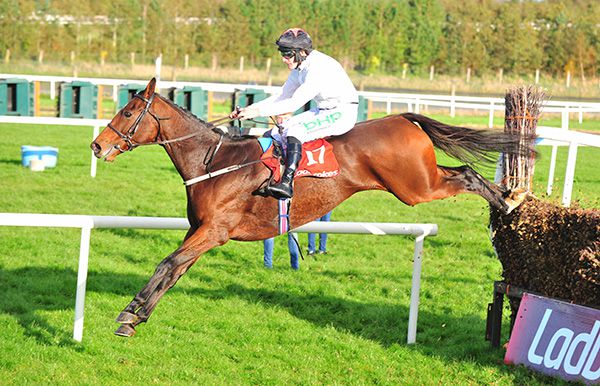 Willie Mullins hopes Cabaret Queen can follow the same path as Total Recall, by following up her Munster National success in the Ladbrokes Trophy at Newbury.

Total Recall lifted both prizes in 2017, and Cabaret Queen put herself on course to repeat the feat when she produced a dominant, front-running performance for a 13-length romp at Limerick seven weeks ago.

It was only the seven-year-old mare’s second start since she was bought out of Dan Skelton’s stable for £13,000 at the sales.

Mullins reports she has thrived since her arrival at his Closutton yard in the spring.

“When mares start to come into form, maybe just a change of stable can bring about an improvement for whatever reason,” he said.

“It freshens them up.

“She’s a King’s Theatre mare, and we’ve been very lucky with those over the years.”

Mullins also left Yorkhill in among 26 horses standing their ground at the five-day confirmation stage for Saturday’s famous handicap.

“He seems to go well left-handed,” he added, of the nine-year-old.

“He’s come down at least 10lb from his top rating, but left-handed should be a big advantage to him.

“He’s always very difficult to ride at home — and what we have done this season is change his work riders around, and have replaced his regular work rider.

“Sometimes when you do that the horse goes backwards, but we will see on Saturday whether it has made any improvement in him.”

Mullins plans to travel over to Newbury, with Paul Townend likely to take the ride on Cabaret Queen.

“I imagine Paul will go over to ride Cabaret Queen,” he said.

“I haven’t got plans for Ireland on Saturday done yet. We’ll solve all that later in the week.

“Hopefully I’ll get over to Newbury. That’s my plan at the moment.”

The sponsors have the Nicky Henderson-trained Ok Corral as the 6-1 favourite, with Cabaret Queen next best on 7-1.

On The Blind Side, Beware The Bear and Brave Eagle are Henderson’s three other possibles for the three-and-a-quarter-mile highlight of the weekend.

The weights are headed by Colin Tizzard’s Elegant Escape, who was runner-up to stablemate Sizing Tennessee 12 months ago.

Tizzard also has Mister Malarkey, Robinsfirth and West Approach in the mix.

Clerk of the course Keith Ottesen expects the ground to be no worse than soft.

He said: “We are currently good to soft ground — although we are going to get some rain today and tomorrow, so we anticipate we’ll go to soft and maybe drying a little bit towards Saturday.

“There’s a couple of millimetres of light, drizzly rain today — and it will be similar tomorrow. Then there is a band of showers, potentially heavy, coming Tuesday evening and throughout Wednesday.

“That should get us to soft ground by the middle of the week — if that plays out as anticipated, another 10mm between now and Wednesday evening.

“We’ve started the week with mild temperatures, 10C and 11C — but it is likely to be colder by the end of the week. Saturday could be quite chilly, but hopefully dry.”