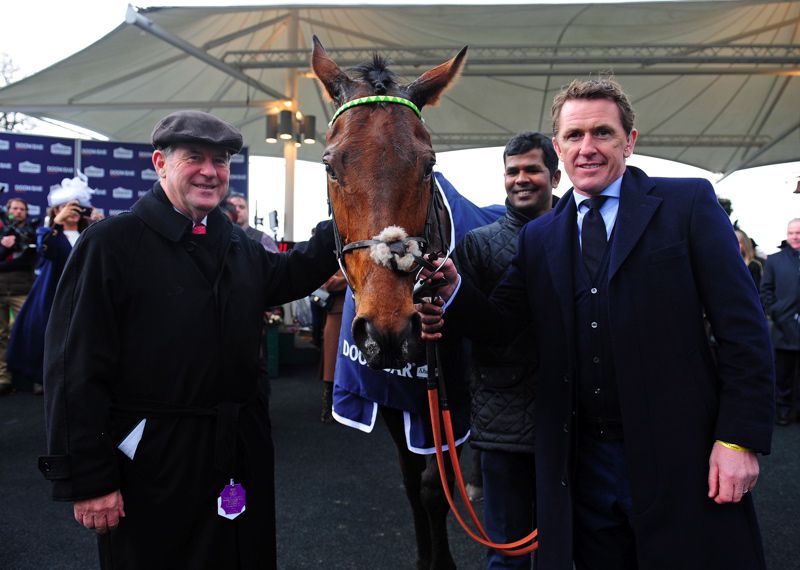 Champ looks set to take high rank over fences this season after putting in a near perfect round of jumping in the KKA-Highpoint Beginners’ Chase at Newbury on Thursday.

The dual Grade One-winning hurdler made a winning debut over fences when proving a cut above his rivals in the extended two-mile-six contest.

Sitting off the pace for much of the race, the Nicky Henderson-trained seven-year-old joined long-time leader Dashel Drasher at the last before quickening away impressively to claim victory by three and a half lengths.

Henderson said of the 8-13 winner: “You would have to say that is about as perfect as you could get.

“I was a bit nervous going two-six first time as he can be quite keen, but on the other hand, slowing it down a bit gave him plenty of time to get into a nice rhythm and school round.

“He took a blow turning in and he (Barry Geraghty) had to sit on him for a second. I thought he would take a blow as he hasn’t done much — just that one bit at Chepstow.

“He had a lot of respect for his fences today and that’s what I was trying to do (by going to Warwick and Chepstow) as he was a bit quick and swift and he was finding it easy at home.

“You do feel a bit of pressure off your shoulders, especially when they do it nicely, as it was professional and clean. He is a very good horse and he has a lot of gears.”

Regarding future plans, the Seven Barrows handler hinted at a return to the top level for the JP McManus-owned gelding after identifying the Ladbrokes Kauto Star Novices’ Chase at Kempton on Boxing Day as a possible target.

Henderson added: “We’ve got lots of options and we will have a look. I suppose the obvious place is Kempton for the Kauto Star. You would be pushed to take another race.

“He is quite a clean horse, but practice is probably a good thing and we will see what JP wants to do.”